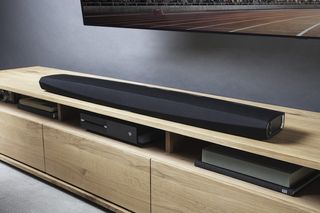 Denon's HEOS wireless multi-room system continues to grow with the addition of two new soundbars, the £699/$799 DHT-S516H and £799/$899 DHT-S716H. They join two existing lower-priced soundbars in the range, bringing the total to four.

The DHT-S516 (below) comes with its own wireless subwoofer, plus support for Google and Amazon voice control (via an appropriate add-on speaker), Dolby Digital and DTS decoding, DSP processing, AirPlay 2 and Bluetooth wireless connectivity and hi-res audio compatibility. Inputs include HDMI with ARC (audio return channel), optical and 3.5mm.

Step up to the flagship DHT-S716 (shown top) and you'll get Dolby TrueHD and DTS-HD Master Audio decoding, Dolby Vision and HDR support plus HDCP 2.2. There's an optional wireless subwoofer, the £599/$599 DSW-1H, and you can build a 5.1 system by adding other wireless HEOS speakers as rear surround channels.

Alternatively, each soundbar can be incorporated into an existing HEOS multiroom set-up so audio can be sent to different rooms around the home.