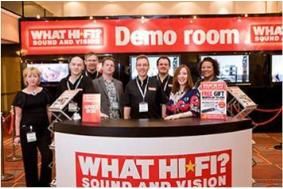 Organised by Audio T, in partnership with What Hi-Fi? Sound and Vision and Sevenoaks, 159 brands have already confirmed their attendance at the show.

It will be packed with exclusive product launches, free demos, advice from our own tech experts, lots of tempting discount deals and prizes galore to be won in the show competition.

• A trio of 3D D-ILA projectors from JVC

• The return of German speaker brand Quadral to the UK

And don't forget the legendary What Hi-Fi? Sound and Vision demo in the Bristol Suite, where the entire editorial team will be on hand throughout the weekend to answer your hi-fi and home cinema queries.

More details about the show, including opening times, location and ticket prices, can be found in our special Bristol Show preview. See you there!