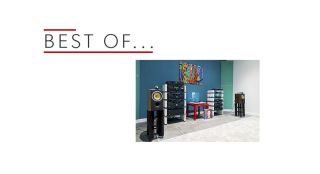 This week, Arcam was acquired by Harman International, guitar maker Fender launched two new Bluetooth speakers and a report by the British Phonographic Industry has revealed that people are still buying CDs and vinyl in big numbers.

Arcam acquired by Harman, a division of Samsung

The news was revealed to Arcam customers via an email from Scott Campbell, Arcam's director of sales and marketing. The existing management in team in Cambridge will remain, with the email noting that "it's business as usual for all of the Arcam team".

READ MORE: Arcam acquired by Harman, a division of Samsung

Fender is best known for its electric guitars, but the company is hoping to hit the right note in the Bluetooth speaker market.

Its two new models are called the Newport and the Monterey. The latter is the higher-end of the two with 120W of power, aptX Bluetooth and support for the AAC wireless codec.

The Newport boasts the same features as the Monterey, but only packs 30W.

Both models are available now, with the Monterey priced £300 and the Newport £190.

Research from the British Phonographic Industry has shown that CD and vinyl are keeping pace with digital distribution.

The report reveals that a third of people still buy music in physical form, with 47m CDs sold in 2016. This year is expected to have similarly robust sales.

The vinyl revival is still riding a wave of popularity, pushing up sales of records and turntables.

UPDATED: B&W DB Series is its most powerful range of subwoofers yet

KEF has done a terrific job with its LS50 Wireless, making its award-winning speakers even more appealing.

The performance is one of impressive clarity and insight, taut bass and strong dynamics. The build and features are excellent too.

Apart from a few usability issues and a hefty price, KEF has once again delivered a fantastic performer.

While it gives 4K movies vivid colours and a good sense of detail, it is lacking in other areas. The picture can be overcooked at times and the lack of Dolby Vision reduces HDR options.

But if you're looking to get in to 4K, this is a cheap way of doing so.

Wharfedale's Diamond series has undergone another refresh and it's the most advanced yet.

The midrange is refined and insightful and the bass is particularly hefty for a cabinet of its size. However, that bass is not the most surefooted, and both dynamics and timing are some way behind its rivals.

The Diamonds face tough competition at this price, and its flaws mean it doesn't reach the quality of its stablemates.