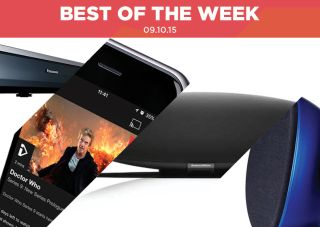 This week Bowers & Wilkins revealed the Zeppelin Wireless speaker, Panasonic dated the first Ultra HD Blu-ray player for launch and Microsoft unveiled a couple of new smartphones along with some tablet devices.

In terms of reviews, we have a tasty line-up with KEF's Egg speaker system, Bluesound unleashing the next generation of its streaming products with the Node 2 and last, but not least, our review of Apple's iPhone 6S smartphone.

MORE: The best TVs of the 21st century

B&W has brought back the Zeppelin, with the new Zeppelin Wireless.

It looks much the same as the original iPod speaker dock, but B&W claims that every aspect has been redesigned to "deliver superlative audio performance" from the new driver units to the reinforced cabinet.

The B&W Zeppelin Wireless is available now for £499.

After Apple and Google, Microsoft took centre stage and unveiled a number of new products including two Lumia smartphones and another Surface tablet.

The 950 and 950XL smartphones both come with Windows 10. The former sports a 5.2in Quad HD display and a 3000mAh battery while the latter has a 5.7 Quad HD OLED display with a 3340mAh removable battery.

Elsewhere, the Surface Pro 4 was announced, along with the surprise announcement of the sleek looking Surface Book, the company's first hybrid laptop/tablet.

At first we thought Panasonic was going to release the first Ultra HD player; then it was Samsung, but now the pendulum has swung back to Panasonic after it announced a date for DMR-UBZ1 Ultra HD Blu-ray player.

There is a catch, though. It will only be available in in Japan on the 13th November (no word on a UK release).

Spec-wise, the DMR-UBZ1 is impressive with 4K/60p playback and HDR video, HDCP 2.2 and the HEVC H.265 codec. It also comes with a 3TB hard drive for recording content and supports high-res audio formats.

KEF has brought the Egg speaker system out of hibernation, and it's a great performer.

The Eggs are a versatile speaker with a distinctive design, and are capable of delivering a good performance wherever you set them up in your room. The sound could be a bit more pronounced, but the speaker's detail and clarity more than makes up for it.

They're impressive speakers and well worth splashing the cash on.

Bluesound made a big splash last year and it has seen fit to update an award-winning line-up after just a year.

Is that too soon? As it turns out, no. The company has managed to take the best bits of the original Node 2, retaining the performance but improving the design. It's a streamer with a likeable character that works well across a range of music genres.

If you haven't sampled a Bluesound product yet, now would be a good time to jump in.

Apple's latest smartphone doesn't re-invent the wheel, but it doesn't really need to with the 6S.

There's little that will win over non-Apple fans, but for anyone else the 6S shows an attention to detail that could be taken for granted, with clever new features that set a high bar for its competitors to match.

It may be more of the same, but who can argue against that approach when the results are this good?