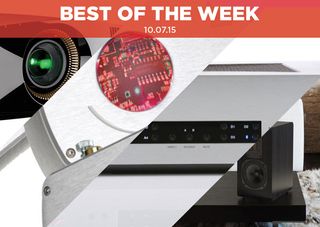 This week Quad revealed more details of its impending S Series speaker range, the BBC announced plans to close a loophole that allows viewers to watch its iPlayer service for free and Sony has teamed up with the Foo Fighters to promote high-resolution audio.

Elsewhere we had plenty of reviews for you to pore over, with Cambridge following up its music streamer with the CXA60 stereo amplifier, while Sony's 4K VPL-VW300ES projector and the 2Qute DAC from Chord also got the full test treatment.

MORE: Amazon Prime Day: What is it? When is it?

MORE: That Was Then... The birth of CD and the "death of vinyl"

Quad has released some more information on its S Series speaker range.

The company confirmed a date for the range's release, which is scheduled for mid-July. The speaker range itself consists of two bookshelf speakers (S-1 and S-2), two three-way floorstanders (S-3 and S-4) and a centre speaker (S-C).

For more info on the pricing and the technology within the speakers, click through below.

Catching up on BBC iPlayer could soon require a TV licence

As the headline indicates, you may have to pay to watch BBC iPlayer.

At the moment the BBC, backed by the Government, is looking to close a loophole that allows viewers to use the catch-up service without paying for a television licence.

The plan is likely to come through in 2017 but it's still an idea at the moment, with questions still in the air over how the BBC would regulate the change. Viewers who have already paid for a TV licence would not be charged extra for watching iPlayer.

READ MORE: Catching up on BBC iPlayer could soon require a TV licence

Foo Fighters to work with Sony to promote hi-res audio

Sony is to partner with the rock band Foo Fighters to promote the merits of high-resolution audio.

The band will act as ambassadors for the format, with Sony stating that delivery of music through hi-res audio is listening to music as the "artist intended". By the sounds of it, the Foo Fighters agree.

It's all part of Sony's continued push to promote hi-res audio, with a number of its products - including the Xperia Z3, NWZ-A15 Walkman and HAP-Z1ES streamer - all supporting hi-res formats.

Monster to team up with Spotify

Hi-res streaming will soon be the standard, says 7digital CCO

Cambridge's CXN music streamer received a stellar review from us last month and the company's come up trumps yet again with its CXA60 stereo amplifier.

Pleasing on the eye, incorporating the 'floating design' of the CXN, the CXA's performance is one that offers plenty of entertainment. Rhythmically it's engaging and surefooted, capable of expressing complex arrangements with detail, subtlety and enthusiasm.

With a plethora of connections, an entertaining sound and a catching design, there are plenty of good reasons to give the CXA60 an audition.

The price of a 4K TV is coming down, but if you go down the projector route it's still quite high, as reflected by Sony's VPL-VW300ES.

What you get for that money is a projector with breathtakingly good visuals, the native 4K performance offering a tremendous sense of clarity and detail.

Sadly you'll have to fork out another £48 for a pair of 3D glasses, but if you can afford this projector another £50 won't be much to grumble about.

The VW300ES is an excellent product that's well worth the asking price.

Chord has had great success in the past with its Chordette DACs and its latest, the 2Qute, has some big shoes to fill.

And fill those shoes it does. Its performance is formidable, outgunning the Qute Ex with an incredibly organised and musical performance that's full of subtlety and depth.

We can't think of anything to criticise. It's a superb and highly desirable piece of hi-fi.