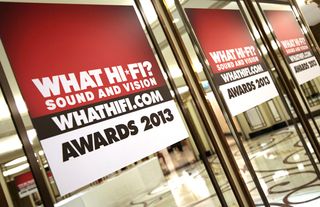 The What Hi-Fi? Sound and Vision Awards have been decided, the Awards ceremony has taken place, and the best tech products of 2013 will be revealed tomorrow, on Thursday October 17th.

The winners will be revealed on our Awards 2013 microsite on Thursday, October 17th, which will be live from 9.30 am tomorrow to coincide with the release of our special Awards issue of the magazine.

From stereo speakers to smartphones, headphones to home cinema amplifiers, we will be announcing a whopping 99 best-in-class Award-winners across 22 categories, with a 2013 Product of the Year in each category. This year we've added two new categories: Soundbars and Wireless speakers & docks.

MORE: How to win a What Hi-Fi? Sound and Vision Award

The Awards are a culmination of all our reviews over the previous months, with all five-star review products considered and pitted against a host of new products submitted for Awards consideration.

The 2012 Awards saw Panasonic and Sony share all of the television Awards between them, and with a host of five-star TVs in 2013, the category looks to be as competitive as ever.

In the world of home cinema amplifiers, it was Pioneer and Yamaha who took the spoils, and both companies have strong entries for this year's gongs.

Roksan and Rega will be looking to continue impressive runs of form in the hi-fi categories, with Roksan's electronics and Rega's turntables on the receiving end of Awards in both 2012 and 2011.

Similarly Audiolab, with its M-DAC, and Sonos, with its streaming music system, will aim to keep their respective run of Awards victories going... but competition is fierce.

We will also be announcing the best music streamers, Blu-ray players, headphones, DACs, all-in-one systems, soundbars and much more besides, not to mention our Readers' Award, which is voted for by our online readers.

You can see a full list of all the Awards 2013 categories on the What Hi-Fi? Sound and Vision Awards 2013 website.

All the winners will be revealed to the world this Thursday, October 17th, when the Awards issue magazine goes on sale and our Awards 2013 site goes live.

Let us know which Award-winners you're most excited to find out about, and who you think will be the big winners, in the comments below...