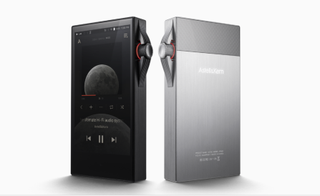 It's fair to say that Astell & Kern knows what it's doing when it comes to hi-res audio portable devices. The Astell & Kern A&futura SE100 is a current 2019 What Hi-Fi? Award winner, but go back just 12 months and you'll see that the Astell & Kern Kann scooped up that same gong last year.

A&K says that the company took the original design of one of its first PMPs, the 2013-release AK120, and reworked it for the SA700; a product where "past emotions and current technology meet".

On the latter, then: the SA700 features a dual DAC, namely two of AKM's AK4492ECB models. It's the first player ever to do offer these components, which promises to bring "a new sound signature" according to the company.

Another neat little feature is the LED light indicator around that trademark volume wheel. It'll glow different colours depending on the bit depth of the song being played (red for 16-bit, green for 24-bit, blue for 32-bit, purple for DSD), and there are said to be 150 levels of red saturation to reflect the current player volume.

There's a USB-C input, both balanced (2.5mm) and unbalanced (3.5mm) outputs and to top it all off you've got wireless Bluetooth aptX HD onboard as well.

The SA700 is available in two colours, onyx black or stainless steel, and while we cannot yet vouch for its sound-per-pound value, we cannot wait to find out...