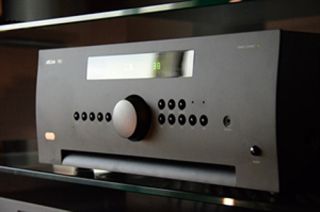 Arcam has gone back to its hi-fi roots with the launch here at CES of a flagship range of stereo amplifiers, led by the 200W A49 integrated at £3250.

Due on sale in March, the A49 will be joined by the C49 preamplifier and P49 power amp a month later (prices of the last two to be confirmed).

All three models have been designed and engineered in the UK, but will be built in Rochester, upstate New York.

The firm describes the new line-up as "Arcam's highest-performing amplification ever" and Peter Kuell, Arcam's senior engineer, boasts "we considered having a volume control that goes up to 11 – it really goes that loud!"

The amps incorporate Class G amplification, a toroidal-based power supply, an acoustically damped chassis and parallel transistor output stages. Both the A49 and C49 feature dual mono volume controls and a balanced signal path all the way through the product.

Arcam claims the A49 and P49 deliver 200W per channel into 8ohms and 400W into 4ohms. They deliver 50W in pure Class A mode, while allowing for extra power reserves from the latest generation Class G topology.

There's also an onboard PSU for Arcam's range of rSeries products, and the P49 can be configured as a traditional stereo power amp, in bridged mode or dual mono mode allowing for the creation of the "ultimate" system of a C49 preamp with six bridged P49s triamping the speakers. Now that we would like to hear!

Also new from Arcam, and somewhat smaller, is its pebble-shaped miniBlink Bluetooth DAC with single analogue output (above) that goes on sale in February for £90, and a new version of the rDock with Apple Lightning connector for £180.