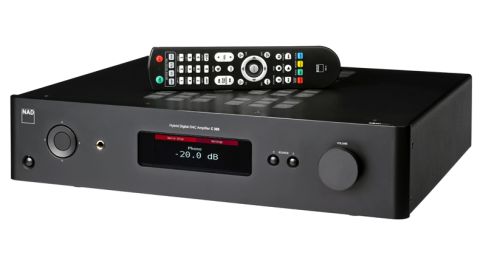 A solid, articulate and well-equipped performer that delivers an easy-listening experience

The design of NAD’s stereo amplifiers hasn’t altered much down the years.

For its Digital series, the Canadian brand strayed a little from its traditional blueprint of black, brown or grey boxes – the D 1050 and Award-winning D 3020 signalled a move to more compact, contemporary casings (think wireless router with a rotary dial) – but the full-width box returns for NAD’s new Classic series, of which the C 368 sits right in the middle.

They aren’t built on an ‘original’ model or any predecessors, instead the C 368 has been ‘designed from the ground up’ to deliver enhanced features and performance while reducing power consumption.

NAD has continued to improve its PowerDrive amplifier circuit, which is designed to optimise power delivery through a wide range of speakers. Here, the company claims an 80W per channel into both 4 and 8 ohm loads.

Packed with functionality, the NAD will sit confidently as the nucleus in any hi-fi set-up. Line-level inputs are the cornerstone of every stereo amp and the NAD has two, as well as a moving-magnet phono stage, to do its bit for the vinyl boom.

An eight-channel DAC chip, which runs in Dual Differential mode with four running on each side for improved resolution, allows for two coaxial and optical inputs apiece, while aptX Bluetooth, courtesy of a screw-on antenna, means music can be streamed from smartphone or tablet, or to a pair of wireless headphones.

Two slots at the rear can accommodate upgrade modules, whether that’s additional digital audio inputs such as a type-B USB for connecting laptops; HDMI sockets with 4K passthrough; or a Bluesound (NAD’s sister brand) one to add hi-res multi-room network streaming.

There’s also a preamp output to facilitate bi-amping for adding greater clout at a later date, a 6.3mm headphone output on the front panel, and two pairs of speaker outputs.

That means there’s plenty to peek at through the vents on the casework’s top panel, which is where most of the aesthetic intrigue lies.

The chassis itself is fairly ordinarily even by stereo amp standards, as are the scarce plastic buttons that adorn it, and everything from the screen to the remote carries an heir of late 20th-century nostalgia about it.

It won’t win any awards for innovative design, but anyone after an unassuming-looking, reliably sturdy box won’t find much to complain about.

The NAD’s appearance has some bearing on the way it sounds: big and solid from top to bottom. Whether we connect through one of its analogue or coaxial inputs, the sonic presentation’s warmth and full-bodiedness emerges, laid bare particularly well by the simple arrangement of Lay Down In The Tall Grass by Timber Timbre.

The NAD is like an anchor to the schmaltzy bassline, and ponders each note without ever slowing it down. As for the high-pitched piano that it rides next to, it sounds precise and insightful without ever exhibiting harshness.

The presentation has an unmistakeable fullness, but never feels choked because of it – or tonally imbalanced for that matter.

The layered instrumentation has room to breathe in the NAD’s wide-open and scrupulous soundstage, and drips through with marked intent and plenty of detail to communicate the band’s spooky sonic persona.

It wades through the swampy reverbed vocal, affording it smoothness and refinement without letting that mask his vocal idiosyncrasies and the heartfelt sentiment behind it.

Dynamically, it pays just as much attention to the smaller picture as the big one, adept in delivering the smaller surges in Pink Floyd’s Ebb and Flow, more billowing sweeps in Dire Strait’s Brothers in Arms and the dynamic thrust in Supertramp’s Breakfast in America.

It’s quite content with rhythms too, and has no problem travelling through the latter track’s agile and rich melodies with impetus. However, erring on the side of caution, the C 638 can sound a little restrained with upbeat songs.

We’d like it to let its hair down and take some cues from the Rega Elex-R when it comes to liveliness.

The delivery doesn’t feel downtrodden or lethargic, it just lacks that effervescent quality that fans of uptempo music may be quick to clock. Still, its easygoing attitude makes it a pleasant co-inhabitant; not once did we tire of the NAD’s sonic display.

Alexander Blonksteiner’s Jane from the Cannibal Apocalypse soundtrack is handled with grace, calming flute melodies oozing texture and warmth, and noodling guitars and intense strings falling into place with just as credible detail.

If this doesn’t tempt you into buying a turntable, or making the most of the one you already have, then nothing will.

As expected, the Bluetooth presentation sacrifices a little refinement and clarity, and dynamics take a noticeable hit too, but Hyde & Beast’s Open Your Heart is still an engaging listen thanks to plenty of space, insight into piano notes, and focus and sincerity to vocals.

The NAD C 368 ticks a lot of boxes as a successful stereo amp.

It’s not only well-connected but has a pleasantly smooth, refined and muscle-bound sound that’s very agreeable indeed – even if by being a touch safe-sounding, it’s leapfrogged by more complete rivals before it’s even had the chance to touch its toes.