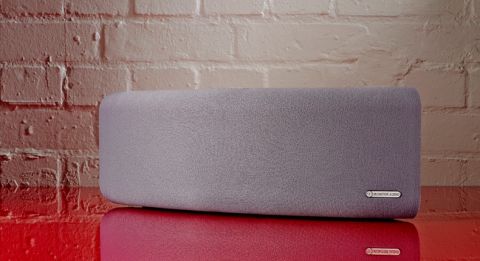 There’s a lot to love about the Monitor Audio Airstream S300, but also a big problem – it supports iOS mobile devices only.

It’s headscratching to understand why a speaker manufacturer would be so selective with its audience, and frustrating when a product is this good.

PCs and Macs are supported via AirPlay, but if you’re using any non-iOS phone or tablet, you’re stuck with 3.5mm playback only – even its proprietary Airstream Direct method is iOS only.

We’ll give Monitor Audio the benefit of the doubt, though. We know that, back when it was designing the A100 stereo amp, Apple did not allow its AirPlay technology to be featured on any device that also featured Bluetooth.

Still, if you’re one of the many iOS users out there, the S300 is worth considering.

Solidly made from a mixture of mineral-filled polymer and reinforced-glass trims, it packs four amplifiers driving its four CCAM drive units, configured into stereo pairs of bass units and tweeters.

Altogether, the amplification delivers an output of 140W; there’s no shortage of room-filling power here. The S300s’ curved design gives a wide soundfield too.

When it comes to streaming, there are two ways - AirPlay or Airstream Direct. The latter connects your service device directly to the S300’s own network, which is great for when there’s no wi-fi available but restrictive for day-to-day use, as you’ll only be able to play songs and playlists stored locally or offline.

We opt for AirPlay, and while it still can’t match the simplicity and speed of Bluetooth pairing, there’s a picture-led Quick Start guide in the box that has our speaker running within a few minutes.

It’s a little restricted on format support, as AirPlay is only capable of AAC, ALAC and MP3 playback, but that will cover all iTunes purchases and streaming from services such as Spotify.

We play Lana Del Rey’s West Coast and the S300’s rich, full-bodied tone jumps to it; Lana’s drowsy, breathy vocal is presented with expression and clarity.

The midrange has a wonderfully clean character, and there are stacks of detail, giving a real insight into the track’s subtler moments. Bass could do with a touch more refinement, demonstrating a solid and weighty punch, but one that could be slightly tauter.

It’s far from heavy-handed though, and integrates well with the midrange for a clear, confident performance.

The midrange stretches up into a smooth, controlled top end that can handle the handclaps on Kingdom’s Bank Head without ever drifting into sharpness or hard territory.

It’s an alluring sound that grabs your attention right away and holds it, indulging you in a detailed and dynamic performance that will entertain time and again.

Android users have been rather cruelly left out of the Airstream S300’s party, but iOS users should most certainly RSVP.