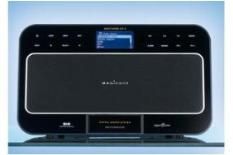 Cogent sound from any source makes the XP2 a front-runner

The Magicbox looks the business with its flat front panel, wedge-shaped construction and slide-
out dock.

And that's to say nothing of its internet radio and wireless music streaming capabilities. The mains-powered system claims 2x10W output, has an auxiliary line input and headphone sockets, while front-firing main speakers are backed up with an upward-firing woofer and rear port.

The small display and sheer amount of touch-buttons means the Magicbox is slightly fiddly than others here to set-up and use, and the iPod dock feels rather flimsy.

There's nothing wrong with the XP2's sound given the price. It could do with more weight, but there's reasonable detail on offer and music moves along nicely.

Why four stars? Simple: other radios offer more for not much more cash.