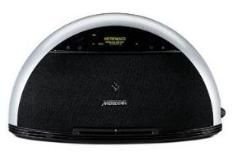 Some might be tempted to dismiss the Meridian F80 as an overpriced ghettoblaster with some Ferrari branding, but do so and you'll be making a massive mistake. Think of it as a transportable system that'll serve in a second room, holiday home, or even as your main system if you're short of space.

It's an unusual move for a high-end manufacturer like Meridian to produce such a leftfield product, but we're glad the company was brave enough to do it. The result is an all-in-one system that's packed full of Meridian technology at a distinctly more affordable price than the company's usual offerings.

Now, we wouldn't lie to you, so here's how it is: a similarly priced, class-leading separates system will better the F80 for outright quality, particularly for those who place a great deal of emphasis on an open-sounding soundstage - not surprising considering stereo speakers and subwoofer are squeezed into such a compact space. However, in every other area, including loudness and bass power, this Meridian is more than a match for price-rival all-in-one competitors.

Deserves to be set up properly
And yes, that includes last year's title-holder for this price sector, the Arcam Solo. Consider: the F80 has brilliant DAB/FM/MW and LW performance, will soon have a matching iPod dock, and it can even play DVDs (though not even Meridian would claim this as a core strength). For sheer versatility, few competitors come close.

We do have a complaint, though. This is meant to be a simple plug and play system, so why has Meridian given it such a complex set-up menu? We suspect most owners won't bother delving too deeply, which is a shame because they'll end up with less-than-optimum performance.

Still, take the time to tune the F80 to its environment, particularly the location adjustments, and we doubt you'll find a better all-in-one system for this kind of money.