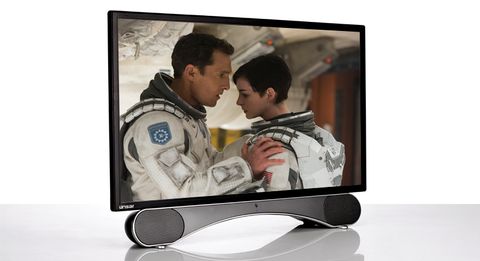 Not perfect, but sets out to give you a better sound and does just that

The Linsar X24-DVD is a TV with a built-in soundbar: makes sense, no? Soundbars have been a popular solution for improving a TV’s inherently thin sounds for years now, so it was only a matter of time before someone put two and two together.

Enter this Linsar. Though ‘better’ speaker systems have been adopted in big, high-end TVs, improved sound in a cheaper, small telly (24in) is nothing short of innovative by the British TV brand. Is it a match made in heaven? Absolutely.

The ‘soundbar’ consists of a pair of speakers – each driven by a 10W amplifier – and also doubles up as the TV’s stand. It looks a little tacked on, aesthetically, but its design adds no more height or depth than any typical stand would, so it’s undoubtedly more space-efficient than even the slimmest of soundbars on the market.

Handy, if it’s going to be used in the corner of a kitchen or bedroom. Better yet, it can also be wall-mounted. On paper, then, it works. In practise, it delivers. There’s no denying the Linsar’s sonic superiority over the hard, thin presentation of TV speakers.

Fulfilling its purpose bang-on, its sound is a great deal fuller and richer, the balance much closer to the sound we’d ideally like (but don’t get) from a standard small telly. Midrange has significantly more body, and it’s this more substantial delivery of voices that will be the most noticeable improvement during everyday viewing.

It goes room-fillingly loud, and we find ourselves more than satisfied just half way up the volume bar. Keep pushing it, though, and near the very top distortion creeps in.

The X24-DVD fancies itself a bit of a multimedia mogul: there’s a Freeview HD tuner for TV viewing; Bluetooth for music streaming; USB inputs for media playback and recording programmes onto a USB stick or hard drive. As its title suggests, there’s a slot-loading DVD player built-in, too, though you’ll have to invest in a Blu-ray player to play HD discs, of course.

The omission of smart services is a little mean, and we feel a bit hard done by when bigger-screen models at lower price tags include it. Linsar’s peace-offering is a free Roku streaming stick for access to a sea of smart apps (including BBC iPlayer, Netflix, YouTube, Spotify) if you buy (and register) the TV by the end of March 2015, but miss the date and it’s not so charitable; you’ll have to resort to a Blu-ray player again or a gaming console as your smart supplier.

Starting with Blu-ray performance, we hook up the Sony BDP-S5200 (£95) player to one of the X24-DVD’s two HDMI inputs – also onboard are the likes of USB, component and 3.5mm inputs, as well as coaxial and headphone outputs.

No matter how much fine-tuning we do with colour settings, the Linsar’s vivid colour palette struggles to find much in the way of balance without sucking the life out of skin tones, so is a little on the vibrant side. The bold, somewhat artificial, hues make for a punchy, dramatic picture, though ideally we’d like a little more realism and subtlety in shades.

Though fair, contrast could do with a boost for deeper blacks and brighter whites, and there’s a hint of motion instability as a space shuttle flies past in last year's Guardians of the Galaxy. The Linsar’s HD broadcast picture isn’t perfect, but there’s still a lot to like. It’s impressively sharp and clean with low picture noise, so viewers can sit close to the screen, comfortably.

Daylight scenes are full of punch and clarity, while darker settings prove coherent, too. Even as we drop resolution to DVD, the image is surprisingly well-defined, with colour punch in spades: in Lucy, Scarlet Johansson’s red lipstick, leopard-print jacket and golden hair are radiant and lush.

The switch from the Sony to the Linsar’s own DVD player sees slightly less sharpness and detail, yet overall holds the standard of quality pretty well. The clean, clear and fairly detailed delivery of standard- and high-def channels is a credit to its tuner. The fairly large remote control is logical, with well-labelled keys making it easy to use for both TV and DVD operations.

Linsar has long been a go-to brand for affordable TVs; the last we saw in 2012 impressed with its competitive picture and affordable price. The focus is different here. The X24-DVD (rightfully) prides itself on better sound, and with the typical cost of a smart-inclusive Full HD TV of this size around £200, does ask a premium for it.

Is it too much? Probably, considering the TV’s exclusion of smarts. We’d like a more natural-looking picture for a fifth star, too.

But for those craving a louder, fuller and more exciting sound for movies or gaming that you usually don’t get from TVs of this size (or bigger, even) and have the cash to spend, the Linsar X24-DVD will make a great little telly for a second room.

We know a good idea when we see one, and this TV/soundbar combo is exactly that.