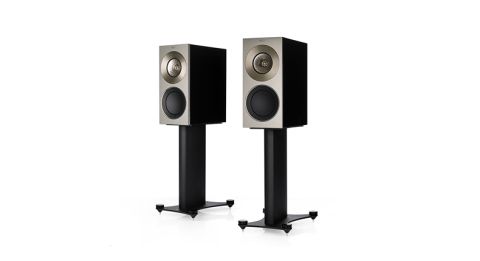 KEF’s Reference 1s are brilliant all-rounders that work superbly across a wide range of music, systems and rooms. Clever engineering and excellent build complete the package

KEF’s recent track record has been little less than stupendous. The company followed the classic-in-waiting LS50 with an Award-winning active wireless version last year, as well as picking up our Product of the Year gong with the terrific Q350s.

Let’s not ignore the company’s five star Bluetooth and desktop speakers either. You can add the Reference 1s to that enviable list. These really are brilliant boxes.

KEF has long prided itself on the quality of its engineering, and it doesn’t take long to discover the Reference 1s are something of a tour de force in this respect.

They are three-way standmounters, which is unusual - most rivals opt for the more traditional two-way route. That top driver is one of the company’s trademark Uni-Q arrays, which place a 25mm metal dome tweeter in the throat of a 12.5cm midrange. The crossover frequency between the two is set at a fairly conventional 2.8kHz.

The idea behind the Uni-Q is to improve consistency of sound dispersion and overall integration between the drivers.

While KEF routinely uses the Uni-Q in two-way speakers such as the Q350 to good effect, we tend to find the technology benefits from being implemented as a three-way, with the bass being handled by a dedicated woofer - and that's the case with the Reference 1s.

The Uni-Q used here is based on the design developed for the company’s statement Blade speakers. Both its drivers use aluminium diaphragms, and the tweeter is vented to improve dynamics.

Everything from the ‘tangerine’ waveguide in front of the tweeter to the ridges on the midrange cone, the shaping of the surround and design of the motor systems, is aimed at reducing distortion in all its forms.

A dedicated 16.5cm aluminium woofer takes over from the Uni-Q below 350Hz. It’s designed to handle large power inputs without compressing dynamics and features a vented magnet system and large aluminium voice coil.

There’s nothing unusual in the bass being tuned by a rear-firing port, but the twist here is KEF gives the end user a choice in the alignment by having an interchangeable design.

There are two lengths of port provided – the short tube gives a low frequency reach of 40Hz and the longer 37Hz.

The trio of drivers is integrated by a carefully calibrated crossover network that uses multiple boards to reduce cross talk, and is decoupled from the cabinet walls to minimise the degradation caused by vibration.

Look around the back of the speakers and you’ll find some chunky yet smart speaker terminals and KEF’s rather neat screw method of swapping from biwire to single-wire operation.

That tidy-looking cabinet is not just a traditional MDF box either. The front panel is an aluminium and resin composite, which adds strength, mass and extra damping to the enclosure.

It’s attached to the rest of the heavily braced enclosure (made of high density wood) with metal rods that clamp from the back panel.

This kind of arrangement adds rigidity, but doesn’t reduce resonances to the required level - so KEF’s engineers add a layer of damping material between the walls, front panel and internal braces to make the enclosure as quiet as possible.

KEF was a pioneer in using measurement and computer analysis in designing and manufacturing speakers, and is justifiably proud of its four decade's-worth of experience.

There were periods over that time where measurement ruled supreme - the thought of fine-tuning performance by listening was, if it existed at all, at best an afterthought.

Fortunately, KEF’s priorities have shifted to a more even relationship between measurement and listening. The company now both measures and listens to the options in every aspect of their speaker designs before deciding on the course of action to take. We think that shines through in the performance of the Reference 1s.

Some speakers, particularly at the high end, are fussy. They need to be positioned just so, be allied to the right system and require a certain standard of recording quality before they start to shine. These KEFs are different.

We start by putting them where our reference ATCs normally stand in our listening room and the Reference 1s sound balanced. To optimise the performance, we bring them a little closer together, firing almost straight ahead rather than being angled in towards the listening position.

Taking advantage of the Uni-Q’s wider dispersion, this makes things better with a broader, nicely layered presentation, but fundamentally doesn’t alter the speakers’ character, in contrast to many rivals that only sound good in a specific place.

The same accommodating nature is apparent when it comes to system-matching. These are top-end speakers capable of a high-degree of transparency, but provided you feed them with suitably talented electronics they’re not unduly fussy.

Just make sure you are in love with the sound of the electronics, as these speakers won’t hide any shortcomings further up the signal path.

These speakers aren’t particularly sensitive though. They’re rated at 85dB/W/m, which means you’ll need a pretty hefty amplifier to get high volume levels in a larger room.

Something with a good current supply and around 100W per channel is a good starting point, particularly as impedance drops to a minimum of 3.2 ohms despite the company claiming an 8 ohms nominal figure.

Having a choice of port lengths is intriguing. Selecting between the two is a simple matter of twisting the screw-on cap that holds the port secure and pulling the slightly flexible tube out.

The long port option works best in our medium-sized test room, providing plenty in the way of bass reach without lacking precision.

The performance of standmounters is governed by the quality of their support. We use KEF’s dedicated stands, which are far from cheap at £1000 - but let the speakers perform as intended.

They’re surprisingly hefty when filled and hold the speakers firmly thanks to a bolt-on arrangement. There’s no need for anything as makeshift as Blu Tack here.

Once up and running it doesn’t take long to discover that the Reference 1s are brilliant all-rounders. They have a broad spread of talents make them adaptable across a wide range of music.

When asked to replay Massive Attack’s Angel at high levels, most standmounters wilt – but not these. These KEFs sound remarkably assured, and have the kind of authority that wouldn’t be out of place in a decently sized floorstander.

For a speaker that stands just 44cm high, they dig deep and render the song’s relentless, rolling bass line with a great deal of power, punch and precision.

Moving up the frequency range, the Uni-Q delivers a seamless, cohesive and impressively focused sound from the midrange upwards. Voices come through with clarity and conviction. The 1s deliver a full dose of subtlety and expression.

Lovely midrange performance gives a real sense of body and focus to vocals.

The highest frequencies may not quite have the extraordinary refinement or finesse of Bowers & Wilkins’ 805 D3s (with their exotic diamond tweeter), but the KEFs counter with superior cohesion and a high frequency character that’s more consistent with the rest of the frequency range.

We switch to Prokofiev’s Romeo and Juliet and the KEFs change gear accordingly. They sound so composed, delivering this engaging symphony with surprising substance and solidity.

Large-scale dynamics are delivered with ease and power, while having enough analysis to keep track of low-level instrumental strands when things get demanding. High volume levels are no problem either - the KEFs manage to fill our test room with ease.

It comes as no surprise to find the Reference 1s image well. Accurate speaker-matching has been part of the range’s DNA from the beginning, and the Uni-Q’s strengths when it comes to dispersion, midrange/tweeter time alignment and overall integration come to the fore in this respect.

The 1s establish a substantial soundstage and populate it with beautifully layered and precisely located instruments.

The elaborate cabinet construction delivers a quiet enclosure, one that doesn’t colour the sound with its own signature. The result is a presentation that breaks well free of the speakers themselves.

We like the speaker’s tonal balance. There are just about forgiving enough as regards poor-quality recordings – though feed the KEFs a harsh recording and they won’t try and make it more palatable – but equally they don’t go out of their way to be rude either.

Unlike most alternatives, the sound from these speakers retains a fair dose of life at lower volume levels. The aforementioned B&Ws are pretty lifeless when played quietly, but the KEFs still sound energetic and fun when used this way.

These KEFs are superb all-rounders. Rather than excel in a few specific areas, they perform well across the board and sound at home across a whole range of music.

They’re as unfussy a high-end speaker as we’ve heard when it comes to positioning and partnering, but will reward care taken in both.

Add deeply considered engineering, smart appearance and superb build into the equation and we have no choice but to recommend them highly.