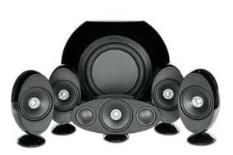 Wireless or wired, the '3005SE is still a great system, but price rises hand victory to its rivals

Despite what the picture might suggest, we're not re-running our review of the Award-winning KEF KHT3005SE speaker package. It is, in fact, the new KHT3005SE-W package. And what does the 'W' stand for? Wireless.

Don't be thinking the whole system is wireless, though, or even the surround left and right speakers. No, KEF has given the subwoofer the wireless treatment.

The only obvious indication of this is the glowing logo on the top of the HTB2SE-W sub, and of course the accompanying wireless sender. Plug this sender into the sub output on your receiver (a cable is provided) and you can place the sub anywhere in the room, so long as you can plug it into the mains.

Any sonic sacrifice?
The good news is that opting for wireless involves no sacrifice. The HTB2SE-W integrates with the satellites just as well as its wired sibling, so you get an open, detailed and punchy performance.

We reckon most people position their sub near their receiver, in which case the wireless package isn't really worth the extra £100, but if you seek true flexibility, go for the wireless version.

You can get the better Radius R90 HD10 from Monitor Audio for similar cash, and then there's B&W's exemplary MT-25, which comes in at just under £1000. In short, KEF has priced itself too high this time around.

See all our micro and style speaker system Best Buys