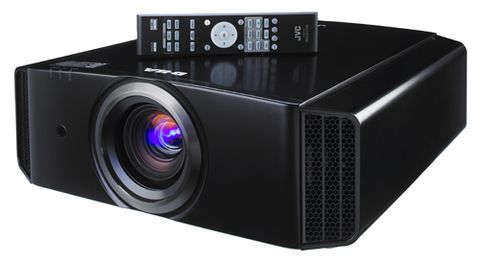 Good but not great, this JVC has plenty of appeal if you like bright, colourful pictures

The projector market is arguably the only AV category where JVC remains truly competitive, and the JVC DLA-X35BE aims to keep it that way. One of the many casualties of the ultra-competitive state of the TV market in recent years, JVC has refocused its AV division on its core camera business, home cinema projectors, and a smattering of portable audio products.

Thankfully, the company has a fine reputation for home cinema projectors. Over the past few years it has been a scrap between Epson, Panasonic and JVC for top honours at the midrange to high-end price-points, with JVC taking home plenty of five-star reviews and the odd Award along the way.

The JVC DLA-X35BE, the entry-level model of a six-strong line-up of new projectors for 2013, will want to uphold this fine tradition, pitting itself against the Award-winning Panasonic PT-AT6000E at this competitive midrange price category.

Much like AV receivers, home cinema projectors don’t tend to overly concern themselves with appearance. Sure enough, the X35 is no different. It’s a big, black, angular box – bigger and heavier than previous models in fact – though it does better than most in somehow looking a little less cumbersome than rivals.

Seeing as you’ll most likely have a £3000 projector installed at the back of the room or ceiling-mounted, the looks aren’t exactly crucial either way in our opinion.

Far more crucial are the connections, as usual found onthe back of the unit. There are two HDMI inputs, which seems a little light, but shouldn’t be an issue for most people, plus a component input and a PC connection. For the custom installation market, or more involved home cinema set-ups, there are also RS232 and trigger connections.

You’ll also see the 3D Sync connection. A 3D transmitter is supplied – it’s a small matchbox-sized device that ‘talks’ to the two pairs of USB rechargeable active-shutter 3D glasses. More on the 3D performance later on.

JVC claims 50,000:1 contrast ratio, 1300 lumens brightness, and the DLA-X35BE has 2D-to-3D conversion as well as that native 3D playback. It’s a standard Full HD resolution design, while all the models above it in the JVC line-up offer 4K resolution (the next model up, the DLA-X55RBE, is £5000).

The motorised lens is a great feature for getting the projector set up quickly: you can use the remote control handset from the viewing position to move the lens up and down, left and right, and to adjust zoom and focus – pretty much everything you need. It all means that getting the picture in position couldn’t be much easier. The long, TV-like remote control has clear, backlit buttons and the menus are basic, but intuitive.

Compared with the models further up the range, we’d suggest most buyers will be pretty happy with the features and spec found on the DLA-X35BE. The claimed contrast ratio goes up as you spend more money – a decent indicator of improved picture performance – but otherwise only professional features, such as ISF calibration and a colour management system, are really missing on this unit. That'll be no great shakes for most users.

Not least as the X35 takes very little setting up. You can choose from a number of picture presets – we opted for natural – and also colour modes, where we found standard to be most satisfying. There’s a 3D mode, too, for optimum 3D picture settings straight out of the box, and this is accessible via the remote control, making switching pretty easy.

You’ll find the usual picture adjustments at your disposal, too. We dialled down the contrast setting a touch to compensate for the slightly over-eager colour palette, but otherwise made few adjustments in order to be happy with what was on our screen.

The Lens Aperture is worthy of mention – essentially it’s the light output of the projector – and comes in handy for adjusting to your particular room’s lighting conditions.

We get down to business, and watching Blu-ray content there’s impressive contrast. The DLA-X35BE delivers strong blacks and bright whites, and copes well with dimly lit scenes. It certainly produces punchy, dynamic images, too, majoring on bold, bright colours.

In fact, as we hinted just above, contrast is, if anything, a little over-cooked, even after we experiment with the various picture modes and settings. We prefer a slightly more natural presentation than we can muster from the X35, the picture trading a little fine detail and realism for maximum impact at times. This will partly be a matter of taste, however.

Bright scenes do look great, though, thanks to sharp edges and a clean delivery with very little sign of noise or other instabilities. Colours are instantly impressive but over prolonged periods we do prefer the more natural, filmic quality offered by rivals such as the Award-winning Panasonic PT-AT6000E. The JVC is just not as easy to sit back and enjoy.

Our eyes are also distracted by the less than iron grip on fast motion. We try the Clear Motion Drive motion-processing setting, but find even the lowest setting is both a little unnatural and prone to introducing instability.

Overall detail levels are very high, and the JVC DLA-X35BE is clearly a highly capable projector in isolation, showing good insight with tricky skin tones and wide-angle landscapes. Up against the PT-AT6000E, there’s only a slight loss of fine detail, the Panasonic delivering a slightly more three-dimensional and involving picture.

Projecting a standard definition image, the JVC sports a similar picture character: bright, colourful images, good black levels and a clean presentation. Again we just want a little more detail to deliver a picture with added realism and the sense of depth the best manage to conjure up. As with HD content, fast-motion tracking is again at times liable to be less than perfect.

3D pictures definitely appreciate the punch and brightness of this JVC, looking less gloomy than the Panasonic without any adjustments to the 3D picture preset. And the level of detail, presentation of colours and overall picture stands up very well compared with the 2D picture, which is no mean feat. The JVC active-shutter 3D glasses are light and comfortable, too.

Motion, again, isn’t flawless, however, and we generally feel our eyes working a little harder to piece together a 3D image compared with price rivals. A lower level of absolute detail means the picture can at times look a little artificial, with objects layered on top of others rather than bedded in together as one complete image. This is not uncommon with 3D pictures, but it’s a flaw nonetheless.

There’s much to like about the JVC DLA-X35BE. It’s easy to set-up and use thanks to the motorised lens and good picture presets, so you’ll have no trouble getting the best out of this projector.

And its best is undoubtedly a high standard: whether you’re watching TV, DVD, HD or even 3D, you’ll be treated to bright, sharp and colourful images.

But the competition out there is very strong – and ultimately we’d plump for the smoother, more natural and more detailed presentation of the Panasonic PT-AT6000E.

Regardless, the JVC DLA-X35BE is absolutely worthy of auditioning and we look forward to seeing the rest of JVC’s 2013 projector range.