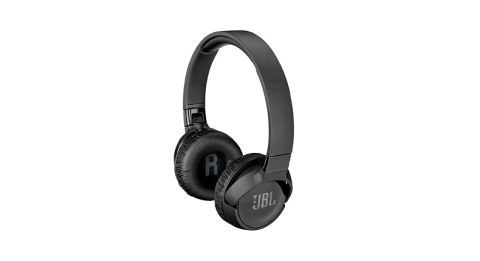 A robust, powerful-sounding package with the added bonuses of Bluetooth and noise-cancelling technology

Bluetooth connectivity, noise-cancelling technology, double-figure battery life – part of us feels grateful the JBL Tune600BTNC provides all of this in a package costing less than £100.

After all, it’s not unusual for some of the best headphones in this category, such as the Sony WH-1000XM2, Bose QuietComfort 35 II and Bowers & Wilkins PX, to cost £300 or more.

The big question: is there enough left in JBL’s kitty, after it has packed in the features, to deliver sound quality that’s up to scratch?

For £90, these JBLs look appealing enough. The plastic that covers the headband and the edges of the earpieces is smooth to the touch, and has an almost matte-like quality.

They look and feel nice, but the downside is the finish doesn’t cope well with the rough and tumble of everyday life.

Likewise, the round glossy inserts that cover the back of each earpiece are a nice contrast to the dulled-down finish and give the headphones a soupçon of style - but, again, the material used is susceptible to scuffs and scratches. A carry-case or pouch would come in useful here, but unfortunately JBL doesn’t provide one.

While we don't expect them to be as bulletproof as headphones costing three times as much, it would still be nice if the Tune600s could resist the scuffs a bit better.

Perhaps one of the alternative finishes could be the answer. These JBLs also come in a choice of blue, pink or white - for an extra £4.

Once in position, the Tune600BTNCs feel secure enough. There’s the usual headband adjustment, and a good amount of swivel and tilt in the earpads.

This means you shouldn’t have any problems creating a decent seal and making the most of the JBL’s noise-cancelling ability. The headphones are also foldable, which should make storing them away easier.

They fit nicely too, with a good level of comfort - though we do find our ears warming up after using them for an hour or so. Given they’re an on-ear design, that’s hardly unexpected – and it could even come in handy during those cold winter months.

The left earpiece has a micro-USB port for charging on its top edge (a cable is included in the box).

Buttons for power, noise-cancelling and playback run along the bottom. A long press of the 'volume up' button skips forward a track. Do the same to the 'volume down' button to jump back.

The power and noise-cancelling buttons are an identical shape, which can take a bit of getting used to. Volume and playback controls are a bit thinner and positioned much closer together.

You’re less likely to lose your way with these, though we did press 'volume down' instead of 'volume up' a few times.

A tiny blue LED indicates you’re connected via Bluetooth, while a white one shows noise-cancelling is switched on.

That’s a decent return on just two hours of charging.

For this money it’s difficult to criticise JBL’s noise-cancelling skills.

They don’t eliminate as much background noise as a premium pair of Bose or Sony headphones, but we don't really expect them to – not least because those models are over-ear designs, which helps with isolation.

To their credit, the JBLs do a good job of cutting through the hustle and bustle of a busy bus or a crowded train compartment. Turn the feature on and the clarity and level of detail that the Tune600BTNCs serve goes up a notch.

But the bass performance really stands out. It’s extremely punchy and tight, but weighty and powerful too. Play Drake’s Legend and there’s a depth and heftiness to low frequencies that some budget headphones can only dream of.

Each bass thwacks hits with force and a sense of dynamism that really drives the track along.

It’s a pleasant surprise to hear the low frequencies handled so well. Thick, woolly or poorly defined bass is often the compromise with pair of budget headphones, but definition is crisp and there’s no sacrifice in terms of weight.

It all adds up to an exciting and powerful presentation. Play Disarm by Smashing Pumpkins and the track sounds as taut as Cristiano Ronaldo's stomach muscles.

There’s weight to every instrument – guitars give the impression they’re being plucked, not tickled. As the bells chime and the violins flow, the headphones handle the dynamic shifts in their stride.

You certainly wouldn’t classify the JBLs as shy and retiring. High frequencies sound crisp and sharp, but not overly harsh or bright.

Our main gripe is that desire to deliver powerful bass can be a little overbearing. When a track calls for a more delicate hand, the JBLs still insist on throwing haymakers.

Play a gentler track such as Oasis’ Cast No Shadow and the song’s melancholic flow is hijacked by the JBL’s desire to impose power and weight when it isn’t really required. It doesn’t do the track’s timing any favours.

Turning off the noise-cancelling relieves a bit of that excess weight, but turns out to be counterproductive. It introduces additional noise and the music loses its clarity and drive.

Some might prefer a more balanced, rounded sound, but in many respects the JBL Tune600BTNCs are very capable.

If you like your bass beefy and meaty, we suggest you give them a try.