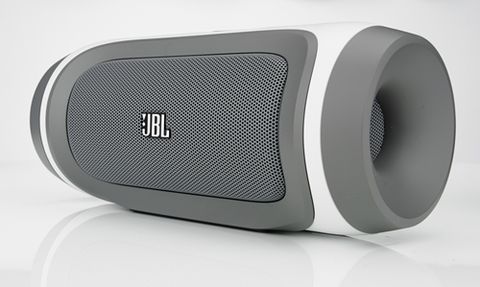 Most recently, we were smitten with the £100 JBL Flip’s attractive build and lively sound. Can the bigger, pricier Charge live up to our expectations?

It’s a punchy, energetic performance – hallmarks of the characteristic JBL sound – but it also has a rather coarse and harsh treble. It’s the first thing you’ll notice, and doesn’t quite go away no matter how long the Charge has been run-in.

There’s still plenty of enthusiasm, though, and great ability with rhythm and detail. It’s a taut and snappy performance: the edges of notes are clearly defined, voices are direct, and it can go pretty loud.

Despite a lightweight bass, it still manages to make an impact: Doctor Who composer Murray Gold’s Fish Custard might sound a bit sharp, but the JBL Charge easily conveys the playful rhythm and uplifting dynamics of the music.

The standout feature on the JBL Charge is the USB charging port at one end. It gives your smart device an extra bit of juice if you’re going portable. Just remember to carry a USB charging cable. There’s no need to worry about draining the JBL’s battery life – it lasts a good 12 hours.

The Charge looks a bit like a large flashlight, but its compact and sturdy build make it easy to carry around and use outdoors. You can play around with positioning, too.

Placing it horizontally on its rubber support makes the speaker fire downwards slightly, with its sound bouncing off any surface you place it on. It seems to lose a bit of cohesion like this, so we prefer using it vertically, where it sounds a touch more open.

Elsewhere, the Charge keeps it simple with Bluetooth streaming and a 3.5mm input. It’s easy to use too, with the power button/pairing control and volume rocker your only controls. It also comes in four different finishes: grey, green blue and shadow (it has black accents instead of white).

The JBL Charge is a decent portable option. Its £120 price-tag makes it more competitive than rivals such as the Beats Pill (£170), although the far more capable JBL Flip remains its biggest competition at just £100.

The JBL Charge’s harsh treble might be hard to get over for some, but there’s a punchy and enthusiastic sound underneath that coarse surface that’s worth a listen.