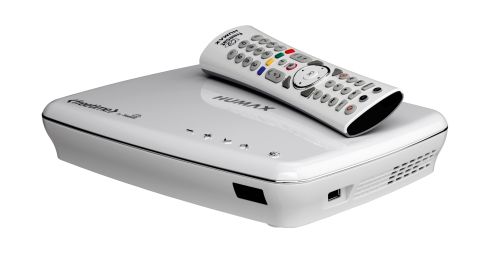 Humax is continuing to dictate this area of the market; you won’t find a more entertaining satellite experience without a subscription

You know when there’s something different about someone, but you can’t tell exactly what? That’s the kind of makeover Humax’s satellite recording box has undergone.

Just a little sprucing up, really; enough to tell you there’s something new.

What the HDR-1100S has over its predecessor, the Award-winning HDR1000S, is built-in wi-fi. That means on-demand content is more accessible for those without an Ethernet connection near their TV but, more importantly it means you can connect to and stream from an external server.

The rest of the stuff from the HDR1000S is still there, of course: 500GB, 1TB or 2TB of hard-disk space to store up to 1200 hours of standard-definition recordings, two satellite tuners, two USB ports and HDMI (through which you may attain 5.1 surround sound), line-level and optical outputs.

From basic set-up, through which the Humax holds your hand, to the electronic telly guide, this box is a breeze to use. Menus are colourful but remain simple and easily navigated, and the Showcase section advertises what you ought not to miss in the near future.

That is especially helpful for Freesat, where you’ve more than 200 channels from which to choose.

We needn’t scroll that far because Bargain Hunt is on BBC One. We get a crisp and clear picture in HD and a colour pallette that fully shows off those gaudy red and blue fleeces the contestants are forced to wear almost certainly against their will.

Movement, as the teams weave between antique stalls, is tracked smoothly and naturally without let up in detail or sharpness. Even standard definition, which is so often a let down when you switch from an HD channel, has plenty of colour and life and steers clear of all fuzziness. We have no complaints about what we see.

The same is true when using catch-up services. You have the usual access to BBC iPlayer, ITV Player, All 4 and Demand 5, plus YouTube, movies on demand from Curzon Home Cinema and Hopster, as well as the ability to scroll back through the last seven days of shows on the EPG.

Programmes such as the BBC’s documentary series Music for Misfits: The Story of Indie, which opens with Joy Division’s Disorder, highlight the Humax as a conduit for quality sound as well.

Setting a recording (you can record two shows at a time, or record one channel while watching another) is as simple as clicking on the show you want to watch and scrolling up through the options, but it can be even easier.

The Freesat App – available on iOS, Android and Amazon Fire – turns your tablet or smartphone into a remote (the buttons on the one supplied click a tad gratingly, so we like this function), but it also allows you to set recordings wherever you are outside your living room. A simple idea, as the best so often are.

The only difficulty we come across is that the Humax doesn’t stream the high-resolution audio files on our XiVa musicm8 server, so you’ll have to convert files if you don’t have mp3 and want to play music through this box, but we wouldn’t go as far as to say that works against it.

In terms of connecting with the server, unsurprisingly, it is as speedy and easy as the rest of the box’s functions. You’ll probably find the app useful here, too, so as to avoid having to scroll through your music library using a television remote.

In January 2013, we said the HDR-1000S was the best Freesat box we’d tested. With wi-fi now on board, making it truly a genuine wireless entertainment hub, our admiration of the HDR-1100S has only grown stronger.

Short of a subscription service, we can’t imagine why you’d want for anything else.

See all our Humax news and reviews