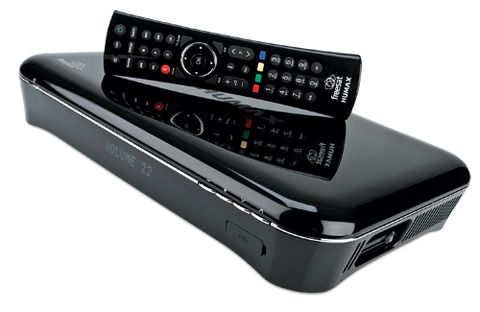 Best Freesat recorder, Awards 2013. No match for YouView, but if you’re determined to go Freesat this is the best box

YouView has given Freeview the kick up the backside it needed. With its elegant blending of on-demand content, live broadcasts and your own recordings, it’s bringing a taste of the Sky and Virgin experience to people who don’t fancy handing over a chunk of their paycheck for the privilege.

Humax has been leading the YouView charge with its Award-winning DTR-T1000, and now it’s looking to sprinkle a bit of that magic onto Freesat with this Humax HDR-1000S. Thinking of this as the Freesat version of YouView might be a bit premature, though.

If the ability to record up to 125 hours of HD content to the 500GB hard drive doesn't sound like enough, then there's a 1TB version for just £20 more.

First impressions are mixed. On one hand the squat, curvy casework is nice,

but the HDR-1000S is rather lightweight and insubstantial.

Despite it being slightly stuttery, the Freetime animation that appears when you first turn the HDR-1000S on is a sign of good things to come. Freetime, you see, is the name given to the new TV Guide, and we have to say it’s rather brilliant.

Press the ‘Home’ button and the programme you’re watching shrinks to about a third of the full screen, with a list of clear menu options in a column on the left and a sample of the highlighted menu’s content at the bottom.

That list on the left gives you access to settings, your recordings and the EPG, but our favourite is Showcase: it shows you six picks of what to watch today on the main screen, with a scroll to the right providing suggestions for later in the week and a flick to the left showing you the best stuff that you’ve missed but is available on-demand.

The EPG has the same system: listings for the next seven days to the right, shows from the past seven days on-demand to the left. A click takes you straight to that programme – for people who are used to using an EPG but unsure about smart TV functions this is great introduction.

There is a problem, though: a slight lack of content. BBC iPlayer and ITV Player are both present, but the HDR-1000S is still waiting for 4OD and Demand 5, both of which are ‘expected 2012’.

YouView, by comparison, has all of the above plus on-demand movies from Sky’s Now TV or BT/TalkTalk, depending on which box you go for. On-demand content doesn’t show up in search results either, rather undermining what is otherwise a very useful feature.

Having said all that, the HDR-1000S is the best Freesat box we’ve tested. It’s a pleasure to use, with all the menus proving clear, colourful and quick to navigate. Picture and sound quality are also supreme – HD is crisp and clean, while standard-def content retains a natural colour balance and avoids fuzziness to impressive effect.

Surround sound audio 5.1 is supplied through the HDMI connection – a feat Sky still can’t manage – and it’s punchy and detailed. You can record one channel and watch another, or record two at once.

So if great sound, superb picture quality and one of the most user-friendly TV experiences out there sounds like everything you want from a PVR, the Humax HDR-1000S is the one to get. Just don’t go thinking this is Freesat’s answer to YouView. It isn’t quite that yet.

See all our PVR reviews