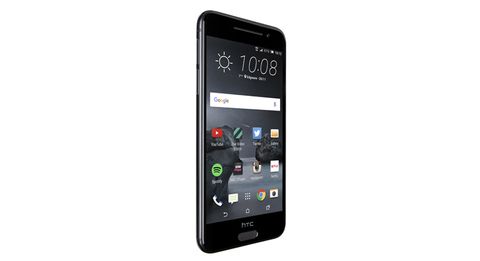 Let’s cut straight to the chase: the HTC One A9 looks like an Apple iPhone 6S. HTC’s new smartphone – which sits alongside (or rather under) the flagship M9 in the One range – bears such a close resemblance to the Apple flagship that we’ve confused them more than once during testing.

We’ve always had a soft spot for HTC, but in light of more accomplished rivals, last year’s One M9 left us disappointed. The One A9 smartphone isn’t meant to dethrone the flagship, but it has plenty of new features that leave the M9 looking a bit dated.

However, the make-or-break moment for the HTC One A9 will be whether people are won over by its Apple aesthetics.

In keeping with the One family's premium status, the HTC One A9 is constructed entirely out of metal and looks sleek and desirable. The A9 is slightly smaller and slimmer than the flagship M9 – it's now 7.26mm instead of 9.6mm deep.

The curved back of previous HTC flagship smartphones is now gone, with the A9 featuring a flatter, more streamlined design.

To HTC’s credit, it’s a great-looking smartphone. It’s lovely to hold, fitting nicely in one hand and having a decent grip. In fact, the A9 weighs the exact same as the iPhone 6S at 143g.

However, there’s an insubstantial quality about the A9 that doesn’t compare with the solid, premium-feeling heft of the iPhone 6S.

There’s a new volume rocker and the home button on the right hand edge of the smartphone, while the microSD and SIM card slots are now housed on the left side.

The HTC One A9 comes in four elegant finishes: carbon gray, opal silver, topaz gold and, our personal favourite, deep garnet. The deep red colour is gorgeous and makes it stand out from silver and gold smartphones flooding the market.

The One A9 is pre-loaded with Android 6.0 Marshmallow, and with it comes all the latest features such as Google Now on Tap (which lets you search keywords on the screen), Google Pay (which works in conjunction with the fingerprint sensor) and Doze (which preserves battery when the screen isn’t in use).

In use, the One A9 is one of the most easy-going smartphones we’ve tested. Navigating around the smartphone is nice and swift, apps open instantly, and the various camera modes are intuitive to operate.

It may not be as smooth and slick as rival flagship smartphones, but the A9 is a cheery, fuss-free smartphone.

Battery life isn’t as encouraging, however. It seems HTC hasn’t been able to raise the game with the A9’s 2150mAh battery. Our video rundown test saw the A9 last roughly eight hours on a full charge. In daily use, we were reaching for the charger by the end of the working day.

The One A9 comes with either 16GB or 32GB of internal storage, which can be expanded thanks to its SD card slot – something that's sorely missing from flagship phones such as the Samsung Galaxy S6 and S6 Edge+.

HTC's own Sense skin remains an unobtrusive interface, and we particularly like the Themes feature, which lets you change the phone's colours, fonts and icons – a layer of personalisation that you don’t get with most smartphones.

The A9 remains a 5in screen with a Full HD resolution, which is disappointing as rival Android smartphones (such as the Nexus 6P and Samsung S6) now sport pin-sharp, wonderfully detailed Quad HD screen.

However, the screen has been upgraded to an AMOLED display, which means punchier and deeper colours. For the most part, the 1920 x 1080 resolution is fine, and streaming shows on BBC iPlayer are nicely detailed and sharp. Motion is stable, too, with the action smoothly unfolding on screen.

The screen’s natural warmth means it’s an appealing picture: colours are inviting, full of punch and energy. Skin tones are convincing, too, with the HTC managing not to look too rosy or yellow.

There is a slight bluish-green tone to white scenes, but it’s not too overblown to be distracting.

Taking pictures with the HTC is a real pleasure – the camera app is fast, and you get a good degree of control over focus and contrast. The results are pleasing, if not mind-blowing.

There’s warmth and punch, but it could do with extra detail and better contrast levels to be true to life.

It doesn’t do too well in poorly lit conditions, with the picture looking rather dark and fuzzy. On the plus side, the slight softness of the HTC’s front camera means you can take decent – and rather forgiving – selfies.

The camera itself has been given an overhaul, with some great features – RAW format support, optical image stabilisation and Hyperlapse time-lapse videos. HTC has retained its UltraPixel front camera from the M9, while the main rear camera is now a 13MP snapper with a two-tone sapphire cover lens.

There's support for shooting Ultra HD 4K video, but you'll have to watch them in full 4K glory elsewhere, since the A9's screen is only Full HD.

Considering all the effort put into the camera, it seems odd not to offer a better screen quality.

Eagle-eyed readers will notice that the front-facing stereo speakers have gone. HTC's BoomSound speakers have always blown away the competition, delivering loud and meaty sound.

That’s not the case here, with the results being broadly on a par with rivals and lacking the scale and sonic weight of previous HTC phones.

The BoomSound technology is still there, but the A9's speakers are now at the bottom edge of the phone to make space for the fingerprint sensor. HTC hasn't lost its commitment to audio quality, and the internal DAC, amplifier and headphone port have all been tweaked on the A9.

It also supports hi-res music (up to 24-bit/192kHz) across all popular file formats, and the Dolby Audio equalisers that were introduced in the M9 make a welcome return.

The HTC One A9 feels like a mixed bag, but one that still has enough goodies to make it an enjoyable phone – the latest Android OS and some nifty camera features will appeal to many.

Picture and sound quality might not be class leading, but they’re appealing enough. As is the HTC A9 overall – it’s not groundbreaking, but a nice smartphone to use nonetheless.