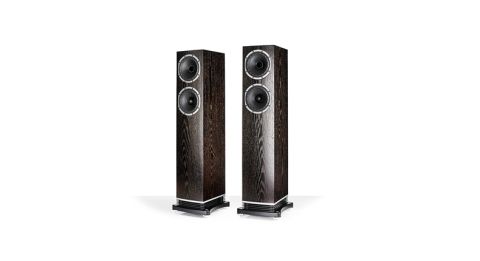 Remarkably well realised in every respect, the F501s are serious contenders

Never heard of Fyne Audio? Don’t feel bad or in any way out of the loop - this is a very new company.

And don’t be too down on what, at first glance, looks like a rather laboured brand-name - this new loudspeaker manufacturer’s Scottish background means the word ‘Fyne’ can be legitimately deployed without it being a pun that might soon grow tedious.

Fyne Audio has arrived fully formed, with two complete series of speakers (the F300 entry-level range and the F500 range from which these F501 are taken) plus a ‘statement’ (for which read ‘expensive’ ) speaker, the F1-10.

The F500 range consists of the F500 standmounting design (plus matching stands), two pairs of floorstanders (these F501s and the bigger, more expensive F502s), a centre speaker (F500C) and the F500FX dipole intended for use as rear speakers in a surround-sound set-up. And Fyne has a range of three subwoofers too.

That’s an extremely thorough debut for a company that’s starting from scratch. But it’s safe to say the F501s look, feel and, most crucially, sound more like the product of a company building on years of experience and expertise.

At 98cm tall, 20cm wide and 32cm deep, the F501s are of unremarkable dimensions for a product of this type.

And in terms of build quality and finish, they’re exactly what a £1200 floor stander needs to be - that’s to say they’re sturdily made, from the chunky locking spikes beneath the substantial plinth all the way along the gently curved MDF-beneath-real-wood-veneer cabinets.

Finish is smooth and seamless - the veneer feels as good as it looks, and the shiny silver band above the port system at the bottom of the cabinet is subtle rather than showy.

On a technical level, the F501s are an intriguing combination of the predictable and the unusual.

It’s the broad strokes that are pretty predictable: a two-and-a-half way design utilising a 25mm tweeter, 15cm mid-bass driver and 15cm bass driver, nominal impedance of 8 ohms and 90dB sensitivity won’t raise any eyebrows at this kind of money.

But Fyne Audio has brought some interesting thinking to bear. The tweeter - a highly rigid titanium dome - sits in the throat of the mid-bass driver in an arrangement Fyne is calling IsoFlare.

This kind of point source design, intended to preserve the time-alignment and thus stereo imaging of the sound, is not unheard-of - but it demonstrates the sort of technical assurance start-up companies aren’t necessarily known for.

The bigger drivers are multifibre paper cones, with unusually sculpted surrounds. Fyne Audio calls this design FyneFlute, and claims it offers more efficient dissipation of cone energy and reduction of unwanted resonances as a consequence.

And at the bottom of the cabinet Fyne has employed some technology so singular its patent is pending.

Called ‘BassTrax Tractrix Diffuser System’ (and we can’t help thinking Fyne Audio got just a little carried away there - try saying it fast and see how far you get), it combines a fairly conventional downward-firing port above a carefully profiled, conical diffuser.

This is designed to convert the standard plain-wave port energy into a 360-degree wave front. So the port’s response is dispersed more evenly and the speaker itself should, in theory, be less picky about its position in your room.

All of this low-frequency regulation takes place behind some slatted vents, which also add a little visual pizzaz to the otherwise necessarily predictable aesthetic.

The F501s’ grilles are, like many a rival design, held in place by magnets beneath the wood veneer.

Unlike many rivals, though, Fyne has considered what happens to the grilles once you’ve whipped them off - the rear of the cabinet has magnets too (as well as chunky biwiring speaker cable terminals), so the grilles can be safely and conveniently stored.

After the usual leisurely running-in period, we get the F501s positioned just so in our listening room.

It’s safe to say the thoughtful Fyne approach makes the speakers pretty forgiving of room position - but we find the F501s to be happiest out in some free space, and toed in just a fraction towards our listening position. In this, they’re no different to the majority of loudspeakers we listen to.

At this sort of money loudspeakers need to be able to turn their hands to any type of music without alarms - but we have to start somewhere, so we give the F501s the chance to show off their chops with Diana Krall’s version of Almost Blue.

This is a high-gloss hi-fi recording, with painstakingly recorded piano and close-mic’d vocal supported by stand-up bass, brushed drum kit and economical guitar - and the F501s absolutely lap it up.

Initial impressions are of a broad, well defined sound stage, solid stereo focus and a lavish amount of detail. No nuance of Krall’s phrasing, no creak of double-bass fretboard, no lingering decay of a piano note is ignored.

But while they’re borderline-fanatical about laying out the last scrap of information, the F501s don’t sacrifice the coherence or unity of a performance in the process. Timing and integration are excellent, and the sympathetic responsiveness of the musicians is never understated or overlooked.

Upping the assertiveness quotient more than somewhat with a switch to Burn With Me by DJ Koze allows the F501s to show off their beautifully even, consistent tonality.

The speakers’ cleverly judged crossover points mean, from the bottom of the frequency range to the top, there’s no noticeable gear-change to the F501s’ delivery. This unified tonality, along with the sweet timing and transparency of their sound, makes the picture the Fyne Audios paint absolutely convincing.

Moving to the Deutsche Grammophon recording of Rhapsody in Blue by the Los Angeles Philharmonic under Leonard Bernstein not only allows the F501s to again demonstrate their fine grasp of timing (Bernstein takes the LAP through at an eccentric and awkward tempo, but the speakers have not a moment’s trouble tying it all together) but also their dynamic prowess.

Rhapsody in Blue is full of attention-seeking shifts from ruminative piano to full-orchestra outrage, and the F501s handle each with confidence. They snap into the leading edges of notes, alive with well-controlled drive and attack, and exit with similar alacrity. And they put significant distance between ‘very very quiet’ and ‘very loud indeed’.

No matter the sternness of the challenges we pose to these speakers, they prove unfazeable. Lotte Kestner’s Secret Longitude shows the F501s can deliver all the character and emotion of a vocal performance; The Grit in the Pearl by Clark demonstrates low-frequency punch, speed and body; The Byrds’ amble through You Ain’t Goin’ Nowhere reveals top-end crispness and substance.

We’ll concede the F501s’ treble response is absolutely as confident and assertive as it can be without becoming hard or tiring.

A degree of system-matching is always necessary, but in this instance it’s imperative - the Fyne Audios’ top end isn’t impossible to provoke. Equally, while the thrilling rapidity of their low-frequency response might (on first acquaintance) be confused with a lack of extension, leaner electronics are probably best avoided.

And while we’re laying out our few caveats, we don’t think the F501s are all that tolerant of background-music levels of volume. They remain cogent and listenable to low volumes, but their vibrancy and excitement properly comes to the fore once the volume control nudges above ‘polite’.

But they’re such an enthralling listen once the wick is properly lit, we doubt you’ll want to hear them at background levels anyway.

It’s obviously a bold move to launch a loudspeaker into the sort of competition the F501s are going to face - but then it’s equal obvious Fyne Audio has no problem with acting boldly. The F501s are an extremely confident calling-card.