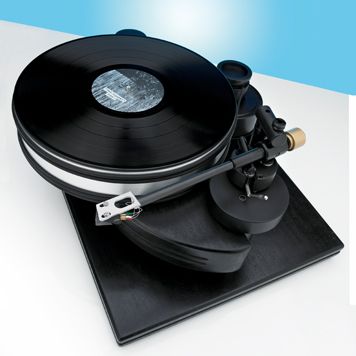 If you value sound quality above all, the Point 5 is as tempting as they come

We’re all in favour of simplicity, but has Fletcher Audio has taken things a touch too far with the Omega Point 5 turntable?

When a product doesn’t even include an on/off button you know things are getting a little extreme.

The oddities don’t stop there, either. Its pursuit of top-class speed stability sees the Point 5 equipped with a high-inertia, damped aluminium-alloy platter and a very low-torque motor.

It’s only just strong enough to keep the 10.5 kg platter spinning at a constant speed, and is too weedy to even move it from rest.

The thinking behind this design is that if the motor were strong, as is the case with most rival designs, any minor spinning inconsistencies will be transferred to the platter, affecting speed stability. If the motor is too weak, the platter eventually stops.

Start-up needs a hand
This Goldilocks approach to motor torque means that start-up needs a helping hand. It’s best to spin faster than required and let the motor slow down rather than going slower and expecting the platter to speed up – you’ll be waiting ages (if it ever does it). Wacky, but it quickly becomes second nature.

It won’t surprise many to learn the speed change from 33⅓rpm to 45rpm has to be done manually by moving the squared-off drive belt from one step of the motor pulley to the next.

Both the plinth and the board the deck sits on are made of hardwood.

The exact type of hardwood is such a big secret that even the UK distributor is kept in the dark as to what it is.

The deck’s plinth sits on three acetyl (posh hard plastic) feet, and uses an arm board made of the same material. This results in a well-damped structure, which is always good as far as turntables are concerned.

The design of the Point 5 is such that it can be fitted with two tone arms for those who like variety.

The main bearing is made of hard chromed steel, brass and tungsten: the use of soft and hard materials is intended to manage energy transfer, and is designed to wear-in over time. The bearing should only need changing every couple of decades or so, so the wear is no big issue.

Another oddity is a little soft rubber rod that touches the underside of the aluminium platter. It’s said to help smooth speed variations, and judging by the stability of the Fletcher’s sound, clearly helps. Still, it’s strange looking…

Design eccentricities deceive
In some ways the eccentricities of the Omega’s design and its home-brewed appearance make it an easy player to underestimate. But that would be a mistake: this is a fine-sounding product.

Our review sample was supplied with an Ortofon 2M Black cartridge – a quality moving-magnet design that costs around £450.

Though this would be at the bottom end of what this deck/arm combo deserves, the sound is terrific.

Unsurprisingly, bearing in mind the Fletcher’s engineering, the presentation was very different from the norm too.

Agile, detailed and fun
Play an album such as Nirvana’s Nevermind and the Point 5 delivers an energetic sound that combines fluidity, stability and authority brilliantly.

Where most rivals render a sharply etched sound packed with detail, the Point 5 has a more rounded presentation where the leading and trailing edges of notes aren’t overly emphasised, but the bits in between are defined richly.

The result is an immensely likeable presentation that’s big and muscular without suffering from a lack of agility or finesse.

Dynamic expression is another plus point, as a listen of Holst’s Jupiter proves.

Here, the Point 5 conveys the ebb and flow wonderfully. It sounds bold and entertaining with large-scale music such as this, but can also change gear effortlessly to become intimate.

The Fletcher Point 5 is as musical as they come. It digs up plenty of detail but never highlights the fact; the music comes first. If that sounds like your sort of thing, you can buy with confidence.