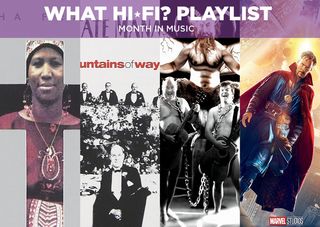 As much as David Bowie, Nina Simone and every Hans Zimmer soundtrack ever have become staple listening material in our testing rooms, we at What Hi-Fi? are always eager to discover, or rediscover, new and old music – an easy feat nowadays thanks in no small part to music streaming services.

Every month, we’ll be figuratively opening our test room doors to share what we've been listening to, and the new releases we're looking forward to hearing.

Cast your mind back to the early 2000s and Stacy’s Mom by Fountains of Wayne may well make an appearance - we're certainly confident you'll be able to hear it now you're memory has been jogged.

It's the stand-out song on Welcome Interstate Managers, an album full of tunes to soundtrack youthful discovery, that ultimately delivers a sackful of feelgood guitar riffs set around none-too-serious 'coming of age' stories.

It’s not too shabby a CD (or high-res file) to plug into your sound system either. Adam Schlesinger and Chris Collingwood’s harmonies are a good organisational challenge for any system, which will need to keep voices clear and instruments distinct.

The sound of cogs turning and wooden blocks tapping at the start of Hey Julie need to be precise and rendered with enough detail to be heard throughout the track. And, provided they are, they can be seen as a suitable microcosm of the message of the album: everything will come together in the end.

If you’re looking for punchy beats and vibrant lyrics to put a smile on your face, you could do worse than give this Fountains of Wayne album a go.

The music for Marvel’s Cinematic Universe has largely underwhelmed. Apart from Silvestri’s themes for The First Avenger and Avengers Assemble, and Brian Tyler’s Iron Man and Thor scores, it’s been serviceable stuff.

Thankfully, things have improved with the last few efforts. And if Christophe Beck’s Ant-Man was a series’ high point, Michael Giacchino’s Doctor Strange is not far off.

The soaring brass of Ancient Sorcerer’s Secret immediately marks this soundtrack out as something a little different. There's plenty of variation, too, from mournful pieces like the piano-led The Hands Dealt, to the ominous villain-theme of The Eyes Have It and the propulsive action of Smote and Mirrors.

Certainly the source material’s mystical leanings lend itself to a score that has more personality than previous efforts.

The final tracks show the variety on offer, and help to make a fine, varied test disc. Go for Baroque embraces a Chamber music style, while there's an Eastern influence permeating through the The Master of the Mystic End Credits.

It was while exploring the new high-resolution Masters albums on Tidal recently that I came across this extraordinary recording by Aretha Franklin and the Southern California Community Choir, made in 1972 at the New Temple Missionary Baptist Church in Los Angeles.

If you remain sceptical about the benefits of hi-res audio, then you really should hear this Grammy-Award-winning double album. If it doesn’t give you goosebumps or make the hairs stand up on the back of your neck, you might want to check your pulse.

Franklin’s voice is spellbinding, whether she’s drawing you in with her extended (11 minute) take on Amazing Grace, raising the tempo with How I Got Over or delivering musical gold with her legendary rendition of You’ve Got A Friend. The infectious enthusiasm of the congregation and the support of the superb backing choir transport you right into that church.

On Tidal this is a Master Quality Authenticated (MQA) hi-res stream (it was remastered and re-released in 1999), and on my first listen I was transfixed. Played on a top-quality hi-fi system, I defy anyone to say that hi-res audio doesn’t make any difference.

Every breath, every note, the atmosphere and acoustics within the church, the piano keystrokes in What A Friend We Have in Jesus – all are conveyed with an intimacy that is utterly beguiling. Did I want to jump up and clap along with the rest of the congregation? Hell yeah!

As the biggest-selling album of Franklin’s career, and winner of Best Soul Gospel Performance in the 1973 Grammy Awards, this is one album you owe it to yourself to listen to. I just can’t believe I’ve only just discovered it.

I wasn't old enough to be able to spell 'tenacious' when this debut album sealed Jack Black and Kyle Gass' outré stickum of comedy meets glam-rock in 2001. Regardless, the band soon became a fixture on my adolescent playlists on my first (and probably second) Sony Walkman.

The Greatest Song In The World (Tribute) gets things started in style, followed by one of the best karaoke songs to wear a cape to (Wonderboy), and then two hilarious F-bomb-titled songs ‘for the ladies’. What follows is a series of impassioned laments on pot, sex and music prowess, carried by Black's melodramatic – often parodic, always profane – rock opera storytelling.

The songs are interspersed by equally entertaining skits, the most snort-inducing being ​Inward Singers, for its 'non-stop rocking' concept, and ​the fast-food-ramblings of Drive-Thru.

But rest assured, this album remains a sonic treat, even without the extra visual dimension.

With the current UK charts whitewashed by the everyman-yet-holier-than-thou triviality of Ed Sheeran, set as it is to its banal, ready-salted melodies, there is comfort to be had in this impending release from a man who may yet recover an ounce of credibility for the now much-maligned title of the singer-songwriter.

In fact, the poignant-if-it-rhymes hollowness of Sheeran’s well-trodden refrain could sit happily aside the other topics of scorn on Father John Misty’s Pure Comedy.

“A lot of the songs of the first two records were like, four in the morning, drunk in bed with pizza hanging out of my mouth,” says Misty, real name Joshua Tillman. “It was very one to one; I had this experience and this song came of it. This record, this is the way that I’ve felt my whole life.”

We’ve been treated already to a number of songs that’ll appear on Pure Comedy, covering themes of war on Two Wildly Different Perspectives and life’s own paradoxes in the album’s title track. Misty’s characteristically droll self-awareness elevates the album, or at least what we’ve heard of it so far, above a champagne-socialist manifesto best served with red wine, hummus and a not inconsiderable dose of suburban narcissism. Bring it on.