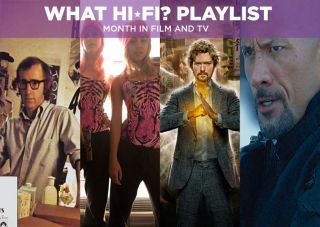 At What Hi-Fi? we watch plenty of films when testing the latest in home cinema, but we're always keen to find new films or use old favourites that we know inside-out.

MORE: The What Hi-Fi? month in film and TV – February

​I say rediscovered - the origins of​ T-shirt-friendly​ lines like "I love the rain – it washes memories off the sidewalk of life" and "I'm so excited, I think I'll brush all my teeth today!"​, ​once 'discovered', don't tend​ to​ easily leave the mind​.​

But my ​well-worn ​DVD of Play It Again, Sam has been collecting dust and the Woody Allen-written​-and-starring​, Herbert Ross-directed comedy drama has recently done a stint on the MUBI streaming service (which​ ​has a daily-changing 30-film catalogue​ –​ perfect for those that spend longer browsing Netflix than ​watching its content).

In ​typical​ Woody Allen fashion​​, he ​plays ​a ​sweet-natured​ neurotic​​ ​who has been ​dumped by his wife and​ – wit​h ​dating ​​advice from an apparition ​of his macho hero Humphrey Bogart​ – is out to regain his confidence with women. ​

With movie tributes aplenty and an ever-​potent ode to Casablanca​ – including the​ film's title​ misquote​, ​the ​As Time Goes By score and Woody's​ quoting of​ 'if that plane leaves the ground and you're not on it with him, you'll regret it​...')​ –​ Play It Again, Sam is, ​perhaps out of all Woody's films, the largest and busiest playground for ​his ​visual ​gags.

The Bogie/Allen pairing makes for some genius ​exchanges, and the awkward-come-endearing relationship he shares with Diane Keaton (the first of many to come) is classic rib-tickling Woody.

Stream it. Buy it, even. And then play it again, whatever your name is.

View Play It Again, Sam on DVD at Amazon

Marvel’s Netflix series have had their fair share of issues. Both series of Daredevil had issues with pacing and focus (series two in particular), Jessica Jones flagged in the middle and Luke Cage fell off in its second half. The problem with Marvel’s Iron Fist is that it underwhelms from start to finish.

Telling the story of Danny Rand (Finn Jones), he’s the heir to the Rand Corporation and wielder of the Iron Fist, a power that allows him to focus his chi and punch things really, really hard.

Orphaned at the age of ten when the plane he's on crashes in the Himalayas, he’s raised by monks and eventually returns to New York fifteen years later hoping to reconnect to his past - but finds obstacles in his way.

From the off Iron Fist lacks purpose and struggles to establish an identity as it fails to flesh out its world in a meaningful way. The storytelling comes across as surprisingly laboured and confused. Dialogue is weak (“You don’t know business!”), characters are underwritten and, to top it off, the action scenes are very disappointing.

Despite a few bright spots in Rosario Dawson and David Wenham, the actors struggle to get to grips with the material, especially lead actor Finn Jones whose protrayal of Danny Rand can grate.

This is very much a missed opportunity; a drab, flat action series that lacks urgency and passion for its source material. Let’s hope The Defenders, which unites Daredevil, Iron Fist, Jessica Jones and Luke Cage, learns from previous mistakes when it comes out later this year.

View Daredevil and Jessica Jones on Blu-ray at Amazon

In October 2013, street artist Banksy announced a month-long residency in New York, revealing a new piece of artwork each day at an undisclosed location. What follows is a stampede, as hoards of fans race to discover, tweet and instagram Banksy’s art before it is vandalised, stolen or confiscated by the NYPD.

First shown on HBO in 2014, director Chris Moukarbel uses crowd-sourced footage to capture the fervour, following fans armed with smartphones in a mass scavenger hunt around the city, the twitter feeds adding to the growing sense of momentum. But it’s the supporting cast of rival graffiti artists, gallery owners, fine art critics and ordinary New Yorkers that provides much of the documentary’s interest.

Intentionally or otherwise, Banksy’s benevolent acts bring out the worst in human nature. From people charging $5 for a photo of artwork they don’t own, to the family hoarding a stolen artwork in their garage, the perceived value of a ‘Banksy’ proves to be a corrupting influence. Subsequently the event is a chaotic celebration of greed.

The madness is neatly contrasted with footage of an unannounced market stall elsewhere in the city struggling to sell genuine Banksy works for just a few dollars. Unlike the deliberately obtuse Exit Through The Gift Shop, Banksy Does New York is worth watching for its excellent depictions of social media, the street art scene and of the corruptible influence of greed.

Viewed after the Banksy hype has died down, the behaviour seems even more bizarre. This is a fascinating film and a fine record of the street art phenomenon at his height.

Spring Breakers is Korine's most recent and most conventional film. Set during Spring break in the U.S. and starring Vanessa Hudgens, Selena Gomez, Ashley Benson and Rachel Korine, we follow their risqué, borderline- and sometimes downright illegal activities until they’re arrested. They're subsequently bailed out by a local rapper called Alien (James Franco), and from there the film descends into gang wars and high-octane bloodshed.

Visually, it’s a saturated spectacle; the pumping, glossy, grotesquely "sexy" shots of spring break are a parody of the glamorisation that teen movies are criticised for.

Alien's embodiment of the American Dream is a sight to behold, and the sexual imagery switches the dynamic of power from the rapper to the girls with an elegance and sophistication that conventional movies rarely get right.

Spring Breakers is a guilty pleasure because you feel guilty the first time you watch it. The trailer paints it as nothing more than a trashy teen flick, but therein lies the rub.

Each of the girls are looking for something new, and audiences that share the feeling are going to welcome the challenges that Spring Breakers brings to its genre.

The Fate of the Furious – Simon Bowles, art editor

This is the film for the protein-shake generation, bringing together all of our muscle-bound vein-popping heroes with the added eye candy of Charlize Theron.

Theron’s character, Cipher, is a criminal genius intent on corrupting Dom (Vin Diesel), and so turning him against the family. And making his second visit to the franchise is our very own Jason Statham, who has built up a reputation as the hardest man in Hollywood. Statham plays Deckard Shaw, who is charged with having to hunt down the now fully rogue Dom.

This film will tick every box on your average petrol-head’s V8 check list. Cuba supplies a twist of vintage-motor Americana with a cast of ’50s Dodges, Chryslers, Fords and Chevys, all set against the backdrop of Havana and its vibrant car culture.

As we fast- (and furious-) forward to the rest of the world, New York, Abu Dhabi and London each have their fair share of cars falling from buildings – all seemingly hacked and possessed by the ruthless Cipher. She even has that most essential of villainous accessories, a submarine.

The Fate of the Furious is due for release on the 12th April – and I suggest some careful scheduling: