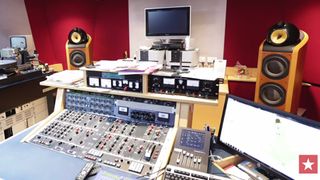 It's 87 years to the day that world-famous Abbey Road Studios opened its doors.

From its roots in classical music to the landmark albums recorded by The Beatles and Pink Floyd in the '60s and '70s, the studios at St John's Wood, London, have hosted musicians as varied as Oasis, Kate Bush, Aretha Franklin, Frank Ocean, Muse, Scott Walker, and more.

It's also where scores of film soundtracks have been recorded, including Oscar-winning The Shape of Water, The Lord of the Rings trilogy, Raiders of the Lost Ark, and of course, Yellow Submarine.

Back in 2015 for Record Store Day, we paid a visit to Sean Magee, a mastering engineer at Abbey Road Studios. He talks about the Abbey Road mastering process, what makes a good recording, high-res audio, and more.

Get a behind-the-scenes look at how a vinyl record comes to life at Abbey Road, some of the kit they use, and why nothing beats your favourite music on wax.