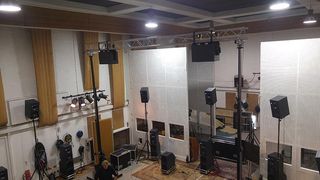 “It’s just like the band is in the room!”, is pretty much the holy grail of reactions when it comes to listening to recorded music.

Immersive audio formats like Dolby Atmos and DTS:X aim to ensure just such a response with movies, and now Sennheiser’s Ambeo 3D sound technology is trying to do it with music.

We first got wind of the tech at the brand’s 70th birthday party in 2015, and now you can hear it in action at a forthcoming Pink Floyd exhibition. And we've had a sneak preview.

According to Daniel and Dr Andreas Sennheiser, grandsons of founder Fritz Sennheiser, Ambeo is “not so much a format. It’s more a philosophy; to capture the reality and make sound as ‘real’ as possible”.

The technology has been used to create a unique mix of Floyd’s Comfortably Numb Hyde Park performance, which will form part of the Pink Floyd: Their Mortal Remains exhibition at the V&A this summer.

Sennheiser is the band’s official audio partner and has been kitting them out with Sennheiser and Neumann (owned by Sennheiser) equipment throughout their career, including for the Live 8 concert. Sennheiser's creative team sees this project as a ‘natural extension’ of the union.

Composer, producer, and musician Simon Franglen and audio engineer Simon Rhodes worked on the Ambeo mix, which is based on the BBC’s original digital multi-track masters, with Andy Jackson, a long-time recording engineer for Floyd.

As Jackson reminded everyone, Floyd were pioneers in surround sound in the 1970s, recording and releasing a quad mix Dark Side of the Moon. Multi-track was what Pink Floyd was attempting to do back then, "we simply now have the technology to take it further,” Jackson says.

The great rig in the sky

We visited Abbey Road Studios in London to hear the final cut demo of the rig and recording in a similar-sized space to the custom-built one that will be installed in the V&A.

The 25-speaker set-up, the exact configuration that will occupy the acoustically-treated exhibition space, will accompany a four-screen display around the room.

It comprises stacks of the Neumann KH 870 and – making up the great rig in the sky – Neumann KH 420 on the ceiling. If our maths is correct, we’re talking about a near-six-figure system.

The goal is to erase the line between the band and crowd - eliminating the "us and them" division, you could say - by putting the listener in the middle of the stage and auditorium at the same time.

Secondly, it aims to create an impressive audio experience wherever you are in the room, which is logical for a museum setting. But this needs to be done without eclipsing the original performance, says Franglen.

The Ambeo technology aims to take the immersive audio motif of ‘place anything anywhere’ even further, letting the engineers use the entire volume of the soundstage.

“Taking things to another level upstairs,” as Jackson describes it, Ambeo expands on Atmos’ notion of overhead sound. With three levels of height, an Ambeo mix allows sound the freedom to move vertically and more cohesively.

As the performance comes back to life, our high hopes were realised. We walk around the room – even past the perimeter of the speaker set-up – and while some spots bring certain sounds more into focus, you don’t ever lose the sound from elsewhere in the room.

Veer to the right, towards Rick’s imaginary keyboard, and Carol Kenyan’s backing vocal is still crystal clear, as are Dave Gilmour’s honeyed tones in the middle. The echoes of Roger Waters’ opening lyrics fill the room, and Nick Mason’s drums permeate the track throughout.

Everything can be picked out separately, even in the dense Gilmour solo, so you don’t need visuals or recollection to picture the stage set-up. However, there is no lack of cohesion in the presentation either.

The show must go on

The team is quiet on whether the exhibition’s Ambeo experience will extend beyond Comfortably Numb, but as the Hyde Park gig also featured fellow hits Money, Wish You Were Here and Breathe, we wouldn’t be surprised to hear similarly-mixed versions for the exhibition. If not, then hopefully one of these days…

What we can say is that it's a win for immersive audio, and for every Floyd fan with an exhibition ticket.

Pink Floyd: Their Mortal Remains opens on 13th May and runs until 1st October at the V&A Museum in London. Tickets are on sale now from the V&A.