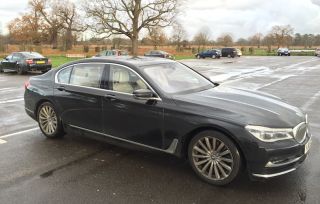 There's plenty of technology to get excited about in the new BMW 7 series, not least the 16-speaker, B&W Diamond Surround Sound System (£4675).

Initially launched at the 2015 Frankfurt Motor Show, this is the first time a Bowers & Wilkins in-car sound system has appeared in a BMW - and this system is exclusive to the new 7 Series.

And, although the British speaker manufacturer already has systems in certain Volvo, Maserati and McLaren models, this is the first of the company's in-car audio systems to feature diamond dome tweeters. It's a technology that only tends to feature in the B&W's high-end speaker ranges, such as the new 800 Diamond Series.

But the in-car audio goodness doesn't stop there. You can stream your tunes using Spotify, while there's deeper Napster and Deezer integration that allows you to download tracks to the car's system.

To find out more and see how the set-up fared, including the weirdly-intuitive gesture controls, take a look at our hands-on video above.