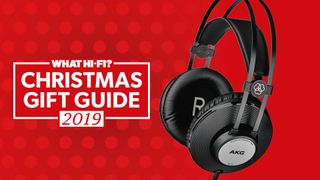 Because the run-up to Christmas is never too kind on your bank balance, and you can now get more for your money than ever before, we have rounded up some of the best tech, music and film gifts available for under £50, including budget headphones, tablets, one of the best 4K Blu-ray releases of the year, and even – wait for it – a USB data and power noise filter.

Naturally we've chucked in some 2019 What Hi-Fi? Award winners for good measure, and with prices likely to fall during Black Friday and Cyber Monday, all our suggestions come complete with the best prices on the internet...

There are many reasons Amazon's What Hi-FI? Award-winning 4K video streamer would make a perfect pressie, but boil them down and one core point remains: it's simply the best streamer after the Apple TV and costs less than a third of the price.

This plug-in HDMI stick's support for 4K and multiple HDR formats (HDR10, HLG, HDR10+ and Dolby Vision) opens the floodgates to premium content from Netflix and Amazon, and brings you BBC iPlayer, ITV Hub, 4OD and Demand 5, Spotify, Deezer and Tidal apps. When it comes to smartening up your TV with all of the above, this is a fiery option indeed.

No dog walk or commute is complete without a decent pair of headphones pumping jams into your ears, and if you happen to be looking for some modestly priced earbuds for the job, look no further than SoundMagic's reliable budget fare.

Scooping a What Hi-Fi? 2019 Award, these E11Cs are the standard-setters at their price, delivering an entertaining, upfront sound, complete with a remote control and mic. A perfect upgrade to those out-of-the-box buds bundled with smartphones and music players, then.

If you've recently enjoyed (and been confused as to what was fact and what was fiction in) Martin Scorsese's psuedo-documentary Rolling Thunder Revue: A Bob Dylan Story on Netflix, you may well be the perfect audience for NY-Columbia Records and Legacy Recordings' latest Dylan bootleg series boxset, which "revisits Dylan’s pivotal musical journeys to Nashville, from 1967 to 1969, focusing on previously unavailable recordings made with Johnny Cash and unreleased tracks from the John Wesley Harding, Nashville Skyline, and Self Portrait sessions".

Want a mini computer for the price of a London round? Amazon's entry-level and best-selling tablet is, as we called it, a "cheap and cheerful" option. Yes it's pretty basic in terms of screen, sound and camera performance – what do you expect for something a sixth of the cost of an Apple iPad? – but needless to say it's great value for money.

Whether it's for a loved one to use for movie-watching, music-listening or as a smart-home controller, or simply to keep the kids at bay on Boxing Day, the Fire 7 will light up the face of the receiver. Amazon Prime subscribers will also enjoy the Amazon-centric quirks.

Budget speaker cable: (hopefully) not the sexiest present you'll buy this year, but what's a hi-fi system without cables connecting it all together?

If you've gleefully shouted out "wireless" as the punchline, then congratulations, you are an esteemed and good-humoured member of the 21st-century tech world. But jokes aside we can't stress the importance of good speaker cables for traditional stereo speakers. And if you or your loved one is limited in budget, this class-leading, What Hi-Fi? Award-winning £12.50/metre AudioQuest wire is where your money should be spent.

Nothing says "Merry Christmas" more than giving someone one of the most harrowing and visceral war films ever committed to tape. This newly restored director's cut of Francis Ford Coppola’s Vietnam epic is 183 minutes of 4K, Dolby Vision and Dolby Atmos audiovisual magnificence (trust us, we've seen it). And there are heaps of Extras for those who want to push the viewing experience well past four hours.

Perhaps one to recommend saving until the festivities have ended.

You certainly get the bulk for your British pound here – especially considering the current £10 discount over their original price. But the value of these AKGs goes beyond what can be initially perceived. For anyone after for a great, affordable pair of home headphones – you'd have to be pretty brave to wear these on the bus – here they are.

Extremely comfortable, with a wider and more detailed sound than comparable street pairs, they’re a great buy. Good luck stuffing them into a stocking, though!

If you've been to a friend or family member's house and their Sonos One or Play:1 is just sat there on a kitchen worktop picking up sauce stains and bread crumbs, or on a bedside table collecting dust, why not treat them and their beloved wireless speaker to a desk stand?

One of many Flexson Sonos accessories, the S1DS not only saves the speaker from getting spoiled but also angles it up towards a listening position and helps isolate it from sonically detrimental vibrations.

It’s the device you didn’t know was needed between a computer and DAC! But any audiophile that has a PC/laptop and DAC set-up will be grateful for it – trust us.

Your answer to the inevitable "what is it?" on Christmas Day: "Think of it as a kind of USB port purifier, acting as a passive filter to dissipate noise and interference coursing through the circuitry of your computer or laptop before the music signal enters your DAC". If you can remember all that.

Audioquest’s USB-stick-sized device is a clever little critter indeed, and an effective one at that.

Looking for the Ultimate year-round gift? In an overt act of shameless self-promotion, we can’t help but suggest our own physical form as a sub-£50 pressie for anyone who not only likes listening to music and watching films but also reading about the kit that's best to play them on.

Our annual subscription gets you 13 issues (one per month, plus our annual Awards issue) featuring the world’s most trusted tech reviews (and some darn good features, if we do say so ourselves) - all for just £47.49. Quick maths tells us that's just £3.40 an issue.

You can subscribe or buy the latest issue here, or buy the digital edition oniPhone, iPad, Android devices or Kindle edition