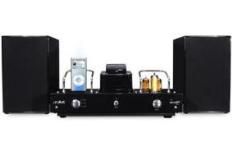 Far better than before, the Carbon is ideal if you have space for a big iPod dock

Considering it culminated in a four-star verdict, we didn't half have a moan about the Carbon when we last tested it. The gripes centred around its perceived build quality and undeniable lack of volume, as well as competition from other Fatman products.

Rather than take solace in some comfort eating, Fatman has addressed all our concerns - and then some. Although nothing on the unit or its packaging announces this as iTube Carbon v2.0, the changes are numerous.

The new transformer is more powerful, there's now a 3.5mm socket alongside a pair of stereo RCA inputs and video streaming from the latest generation of iPods to further the system's flexibility, and the speakers have been tidied up.

In fact, build quality across the board seems much improved, with none of the graunchy vagueness to fascia controls we whinged about last time. Only the reworking of the remote is less than successful (who puts 'volume up' to the left of 'volume down'?) and even then it carries more functionality than most.

Powered-up performance
We had much less cause for complaint where the sound was concerned and, thanks to the beefier power output, the new model is even more enjoyable.

The high-gloss sound of Steely Dan's Any Major Dude Will Tell You is a perfect fit for the Carbon - the warm, eloquent valve characteristics of the Fatman give the song low-end weight and substance, and the airbrushed vocal is polished to a highly communicative sheen.

Percussive sounds at the top of the frequency range are just about bright enough, and the Carbon integrates and separates the differing elements confidently.

Unsurprisingly, the Fatman excels when it comes to stereo focus and imaging - not everybody will want separate speakers, but those who do will reap considerable benefits.

Mind you, the Carbon is available without speakers for £100 less, and Roth OLi1s or Tannoy Mercury F1 Customs would be an even more appealing match.

Oh, and the Fatman has come down in price by £50. On top of the other changes, a five-star rating is easily attained.