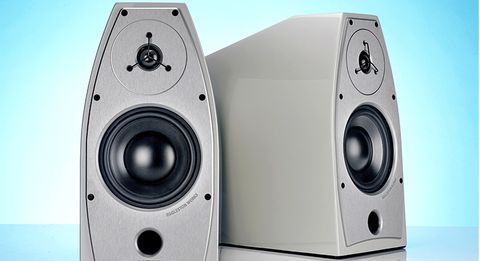 The Nicos are compact, beautifully made speakers that deliver sound with a great deal of enthusiasm

The Nico is an entry-level product for Memphis-based EgglestonWorks. Since the late 90s the company has specialised in high-end speakers, mainly floorstanders.

The company’s current range-topper is the Ivy Signature, which costs around £100,000, weighs in at 340kg (each) and packs no fewer than 19 drive units per cabinet.

The Nicos may not go to such extremes, but there’s a clear family resemblance in the chiselled cabinet design and the quality of build. It may be the most affordable model the company makes, but that doesn’t mean shortcuts have been taken in construction.

These aren’t particularly large boxes, standing just 38cm high, but their cabinets are still heavily braced and well damped, resulting in a rigid and inert structure.

The front and rear panels are 32mm of multi-layered MDF, while the sides are still an impressively thick 25mm. A layer of thin laminate covers the complete enclosure to eliminate visible seams.

The finish is excellent, with the Nicos oozing a quality feel few rivals can better. There are three standard options ­– the metallic white of our review sample, metallic silver and metallic charcoal, though any colour can be custom matched.

It’s rare that a small specialist speaker manufacturer makes drive units in-house, so it comes as no surprise to find these come from outside sources. Both the 25mm soft dome tweeter and 16.5cm mid/bass drivers are proprietary though, made specifically for EgglestonWorks and not used by any other brand.

As with any speakers at this level, it’s worth putting some effort into getting the system set-up just right. The Nicos sound balanced close to the wall, thanks in part to the small forward-facing reflex port, we preferred them about 50cm into the room, with a slight toe-in towards the listening position.

This gives a degree of extra weight to the speaker’s low-end without sacrificing too much in the way of depth or precision.

A single pair of speaker terminals avoids the clutter of biwring, and also allows you to focus on getting a single run of high quality cable rather than two. It pays to spend a decent amount of stands.

We used both Custom Design FS104 Signatures and Q Acoustics Concept supports, but settled on the mass-loaded FS-104s for the marginally crisper dynamics they helped the Nicos deliver.

Once up and running these are likeable performers, packed with character. Play Stevie Wonder’s Living For The City and these boxes are at home, delivering the music’s hard-driving rhythm track with infectious enthusiasm and pounding out the low notes with conviction.

These are small speakers – standing just 38cm tall – so really deep bass isn’t an option, but what they do deliver with Stevie’s distinctive vocals and the song’s dense instrumentation is taut, agile and tuneful.

There’s a good amount of detail on offer, enough to give pleasing insight into the song’s structure and recording. There’s a fine degree of composure too, with the Nicos staying in control, even at volume.

That trait is evident when we listen to Where We’re Going from Hans Zimmer’s Interstellar OST. These standmounters deliver the music’s dramatic shifts in intensity and level with zeal; they may be small but they’re certainly not short of brio.

However, they aren’t the perfect all-rounders. Tonally, things are tilted towards the treble making them sensitive to partnering kit and liable to make a meal of harsh or aggressive recordings.

The top end isn’t the sweetest around and veers towards thinness on occasion, but partner these speakers with smooth sources and amplification – probably of the valve variety – and this won’t be an issue.

Related to the tonal tilt is a lack of solidity to the sound. That bass end lacks a degree of the punch and authority that some notably cheaper alternatives such as ATC’s SCM19s have in spades. This robs that articulate midrange of natural warmth and substance too.

With careful system matching we have no doubt that these Nicos can be made to sing.

Beautifully made, distinctively styled and featuring a combination of agility and enthusiasm that’s mighty appealing, these speakers may not be flawless, but we like them a lot.