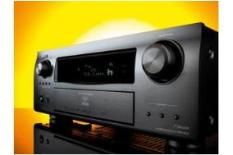 3D is all the rage in cinemas at the moment, and it won' be too long before it hits your TV, too. In the meantime, home cinema is undergoing a similarly multi-dimensional revolution, with a slew of new amplifiers able to power more speakers than we'd previously imagined possible in a British living room.

The Denon AVR-4310 is a design with seven channels of amplification, plus provision for subwoofers. But it can be configured in a variety of ways, thanks to two advanced new sound processing modes: Dolby Pro-Logic IIz and Audyssey DSX.

These build on the established premise of three front speakers, two rears and, optionally, two 'surround back' rears by adding additional front speakers, giving you five fronts and two rears – at the expense of its surround-back capability.

Now 5.1 does most people fine – but this is a £1900 receiver, likely to find its way into the hands of an enthusiast. And, to enthusiasts, the big-scale drama of additional height or width sound channels is compelling.

It sounds worth the money, too. You're never in any doubt as to the sonic scale of this receiver: it's not necessarily as visceral as some, but it captures effects precisely and relays them confidently, placing details exactly where they ought to be.

The subtle, moody atmosphere of the jailbreak scene in Public Enemies is hair-raising, with ambient sounds adding layers of tension. However, when the action kicks in and the bullets start to fly, the Denon seems a little reticent next to the class best, Pioneer's SC-LX82.

It goes equally loud, and remains similarly assured, but it can't elicit the same punch, scale or plain, full-on excitement. Still, it makes a respectable, if undemanding, stereo listen.

Of course, the Denon's real deal is that front-height speaker support, and in that regard, it's a success.

However, if you can live without that feature we'd suggest the Pioneer is an even more impressive listen.