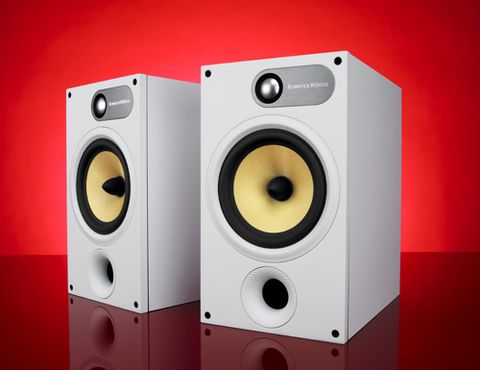 There are more talented rivals on the scene, but the veterans are enduring greats

The Bowers & Wilkins 685s burst onto the scene almost six years ago. They won awards in 2007 and 2008, and have managed to hold on to their five-star rating ever since. We last tested these veterans in a loudspeaker mega roundup in July last year, and liked them enough to highlight them as long-standing favourites.

That they have lasted this long at the top is nothing short of impressive, and we’ve developed a lot of admiration for them. But with new contenders on the scene it’s time to see if these greats still hold up.

It's not just the 685s' performance that has proved enduring. The square-edged, vinyl-wrapped cabinets are livened no end by a combination of soft-touch paint on the baffle, a shiny, asymmetrical tweeter arrangement and bright yellow Kevlar mid/bass driver.

Face on and grilles off, the B&W speakers remain interesting and individual lookers.

Placed where they're happiest (out in a little free space), toed-in slightly towards your listening position and single-wired (B&W fits biwire terminals to the 685s but we think they sound their best on a single length of cable), the B&Ws are the same engaging, energetic listen we've always loved.

Eli ‘Paperboy' Reed & The True Loves' scorching Come and Get It offers a tough test of timing, attack and midrange resolution, and it's a test the 685s positively relish.

They create a wide, deep soundstage, and their powers of focus and separation mean it's simple to follow individual strands of the recording even as the speakers present a cogent and convincing whole.

The song's vaulting dynamics present no problems for these speakers, and there's a stack of detail available from the taut, well-defined top of the frequency range to the deep, speedy bottom. The soul holler in the midrange is packed with character, but not at the expense of transparency or precision.

However, there's an undeniable discrepancy in character between the high frequencies served up by the metal-dome tweeter and the rest of the frequency range; the slightest suggestion that treble sounds were recorded in a different environment to the rest.

Added to that is the impression that the bass is a bit tubby, (improved by single-wiring them) and the 685s aren't quite enough in the current form to beat off the new competition.

So it’s four stars for the 685s. It says a lot for these B&Ws that they’ve only lost their fifth star after almost six years. And it’s not through any particular fault – there’s no shame in being outdone by newer opponents. These are very good all-rounders for the money, firmly holding on to their place in What Hi-Fi towers as old favourites