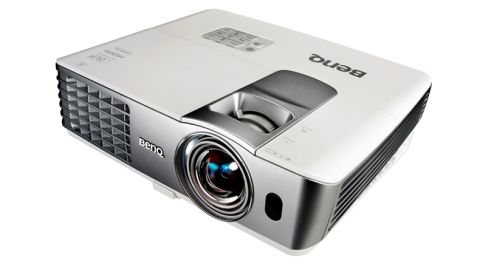 It’s certainly possible – as this may just be the best big-screen picture we’ve seen at £1000 so far this year.

The picture is bright, crisp and clear, but it’s the subtlety with which colours are delivered that really impresses. BenQ claims there are 1.07 billion colours on display, and we’re inclined to believe them. Colours are rich and punchy, but they don’t cross the line into overblown.

Even the green skin of our CGI heroes in Teenage Mutant Ninja Turtles are shaded, mottled and textured enough to look realistic. Human skin tones are nicely balanced and look natural, too. Whites and highlights are clean and shine bright, while blacks go inky deep without swallowing finer detail.

We have to commend BenQ’s abilities when it comes to dark scenes; you can clearly see the lush, deep-green foliage against the pitch-black forest scene in Godzilla, where rivals such as the Optima HD50 aren’t quite as discerning with shadow detail. The picture’s depth makes for a captivating watch.

For fans of 3D films, the BenQ’s 3D glasses are comfortable to wear, and the picture is just as smooth, bright and dynamic as in 2D.

Motion is smooth and flicker-free too, and the W1080ST+ is decent at upscaling DVDs, albeit with some fuzziness and drop in colour subtlety. But watching The Grand Budapest Hotel on DVD never feels frustrating – it’s still enjoyable.

There’s a 10W speaker inside the projector, and it sounds pretty good. Voices are loud and clear, explosions and engines rumble pleasingly, and there’s a sense of space and width.

There’s satisfying weight we usually don’t hear from projector speakers at this price, but of course really you’ll need external speakers or a 5.1 speaker package to fully appreciate a movie soundtrack.

This well made projector is compact and light enough to be moved around. It has a short throw, so you can place it closer to the screen than most of its rivals. There’s plenty of adjustment to allow you flexibility with positioning.

One tiny niggle is that the entire projector wobbles when you adjust the focus. Other than that, the W1080ST+ is easy to use. The menus are basic but they operate smoothly, and the remote control is intuitive to use in a dark room thanks to responsive backlit buttons.

You can plug your Blu-ray player or AV receiver into either of the projector’s two HDMI inputs. There’s support for MHL, too, so you can watch HD videos from compatible Android devices.

It has a PC input for streaming movies and TV shows, and a separate wireless module is available to minimise cable use.

The BenQ W1080ST+ is excellent value for money and great to use. It delivers an entertaining picture and even sounds rather good.

If you are looking to set up your first home cinema room, you can’t really go wrong with this BenQ.