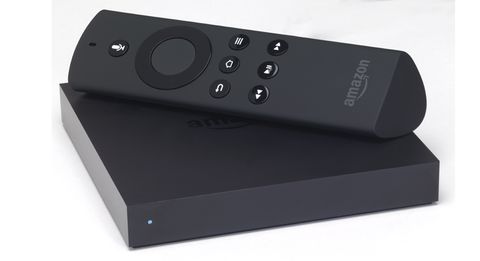 A great streaming media player, but Amazon is a little heavy-handed

Physical formats are dead. Or that’s what you might think, if you look at the prominence of streaming devices on the market. Even TVs come with streaming services built into them these days.

Now Amazon wants a part of the action, and its champion is the Fire TV streaming media player. Are things about to heat up?

That means it won’t quite disappear from view when plugged into your telly, but don’t worry about it getting in the way. It’s a handsome little square: about the size of two stacked CD cases. It’s subtle, but stylish, for a TV box – the black finish is mostly matte, with glossy accents, both of which are fingerprint magnets. The corners are a bit sharp, but then you’re unlikely to be fondling it once you plug it in.

There are five connections: power, LAN, HDMI out, optical out, USB. The latter doesn’t seem to do anything. We tried using memory sticks and hard drives, to no avail. That means no plug-and-play local file playback; Amazon tells us that it might enable this in future but, for now, nothing will happen if you plug your storage device into the USB port.

There is no bundled HDMI cable, so you’ll have to find your own. You do get two Amazon branded ‘AAA’ batteries for the remote control.

To get started, you need an Amazon account. A nice touch is the pre-registration: buy a Fire TV through your Amazon account and it will come pre-loaded with your details. That means you don’t need to enter your email address and password to log in.

Installation is straightforward. Just connect the mains adaptor and an HDMI cable – the system guides you through the rest with on-screen instructions. Attaching an ethernet cable is the faster (and more stable) way to connect to the internet, but wi-fi doesn’t take much effort – just follow the prompts to locate your network.

Once connected, the Fire TV automatically downloads the latest firmware update. This takes a matter of minutes. Next you get a cute animated video introducing the Fire TV and its features. Some of it is helpful, but there’s no option to skip it should you want to. We tried.

Once that’s over, you are taken to the home screen, where you start your streaming journey. The main screen shows recommended content and recent activity. This is also where you download apps. It’s a simple interface with colourful tiles on the right and a list on the left: ‘Search’, ‘Home’, ‘Movies’, ‘TV’, ‘Watchlist’, ‘Video Library’, ‘Games’, ‘Apps’, ‘Photos’ and ‘Settings’.

‘Watchlist’ is a collection of all the movies and TV shows you save for later. ‘Video Library’ contains all the content you buy or rent. ‘Photos’ shows all the photos and videos stored on your Amazon Cloud Drive. Amazon has also launched itself into games territory.

There’s a small (but growing) selection of titles, which can be downloaded into the 8GB internal storage. While you won’t get anything near PS4 quality, there are a few of the better titles you might find on your tablet.

The more basic ones, such as Badland, can be played with the remote control alone. For more intensive (‘proper’) games such as Dead Trigger 2, you’ll need something a little more substantial. Amazon has made a Bluetooth games pad, which looks and handles like an amalgam of Xbox and PlayStation controllers. It is sold separately for £35.

Click on ‘Movies’ or ‘TV’ and you’re taken to an extensive video library, but this is limited to Amazon Instant Video. This is great for people with Amazon Prime membership, but others will be asked to pay. This is Amazon’s show, after all.

Other sources can be downloaded and then found in ‘Apps’, tucked away near the bottom of the menu. We’re pleased to see most of the streaming big guns: Netflix, BBC iPlayer, Demand 5, YouTube, Spotify. Sadly, there is no sign of Now TV, 4oD or ITV Player.

It’s a crowded app market, like the one you find on Roku streaming devices. That means despite some goodies, most of the apps (free or purchased) aren’t particularly useful. We can see the appeal of Sky News, Curzon Home Cinema and Vevo, but some of them are downright obscure. HypnosisTV anyone?

Time to talk about what's inside. The Fire TV offers 1080p video output. Audio output supports Dolby Digital Plus with up to 7.1 channels. The quality is on par with other streaming devices we’ve tried: the Full HD picture is sharp and the sound is solid.

What really impresses us is the speed of operation. It’s seriously fast. As anyone who has tried to flick through smart streaming systems will know, there’s usually a fair bit of waiting, with typing being particularly tedious.

That’s not the case here. Armed with 2GB of RAM (versus the Roku Streaming Stick’s 512MB), the Fire TV bounces about as quickly as you can press the buttons. Content loading-time is average, but you’ll cut through menus and on-screen keyboards with barely a trace of lag. Don’t want to type? Then you can search by voice. Hold down the microphone logo on the remote and call out film titles or actors’ names.

Speech recognition is among the best we’ve tried, only occasionally tripping over such spell-check favourites as Chiwetel Ejiofor and M. Night Shyamalan. Sadly, it is not advertised that this feature only works for Amazon Instant Video. On every other app, you’ll have to tip-tap your way through in the traditional way. That’s great for Amazon customers, but not for everyone else.

The Amazon Fire TV is mostly a success, but there’s still work to do. We love the speed and the voice search function, which genuinely makes operation a lot easier. What we don’t like is the price and app offering.

For the money, we’d like more apps. Rivals such as Roku may not be as slick but they offer a similar experience for less. We’re also not keen on the huge bias towards Amazon Instant Video customers, which leaves everyone else unable to use all the functions.

We really like the Fire TV, but we don’t love it, yet. It will take a few changes before we can talk about that fifth star.