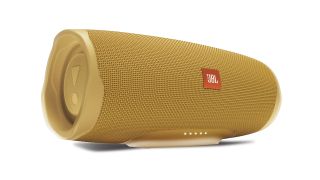 JBL is the figurative king of wireless Bluetooth speakers. The popular US brand has made a plethora of the things, ranging from super-affordable portables to feature-packed boomboxes – and every one we’ve reviewed has bagged either a top-honours five-star review or a very commendable four stars.

What we're saying is, it's a safe brand to buy into – and since its release in late 2018, the excellent JBL Charge 4 has stood the test of time. But should you buy one? Or might an alternative serve you better? How about the smaller, newer Flip 5, more powerful Xtreme 2 or Boombox, or even the dinky Clip 3 wireless speaker?

If you're wondering if you should buy a JBL Charge 4 or if it's any good, read this guide first. We're about to work out if it's the best wireless speaker for you.

JBL Charge 4: Should you buy it?

The fourth generation of JBL's Charge wireless speaker is still as well specified as you could hope for at this level. Dual external passive radiators and a proprietary developed driver kick out 30W of power, and a 7500mAh battery offers 20 hours of playback from a single charge.

Wanna cut to the chase? The sound quality to be had here is great: "classy and surprisingly refined for a mainstream speaker". Just read our full Charge 4 review, you'll see how much we like it. On top of a levelled-up sonic performance, you can charge a smartphone or tablet through its USB connection, it is waterproof to IPX7 (meaning it can be immersed in up to one meter of water for 30 minutes) and it has a 3.5mm audio cable input, allowing you to connect older music devices.

It’s also compatible with JBL Connect+, meaning you can connect other JBL speakers (up to 100 compatible JBL speakers, in fact) for simultaneous playback. Two smartphones or tablets can connect to the Charge 4 at the same time, too. And like almost every JBL wireless speaker, the Charge 4 comes in more colour finishes than you could comfortably eye up in one glance.

The fact that we really like the Charge 4 will come as little surprise to those who read our Charge 3 review, which we praised for its “rugged and sturdy build”, “weighty and extremely powerful” sound and “useful features”.

The short answer is yes, you should still buy it in 2020, especially since it can now be snapped up for a fair few notes off its original recommended retail price.

The Charge 4 is a wireless speaker we wouldn’t hesitate to recommend for those after a well-built, portable unit. It's ideally-sized to carry from one room to another and has a generous battery life that won't need topping up too regularly. At this price, it's difficult to find any real excuse not to buy one.

Naturally, when an update comes along, its predecessor drops in price – as is the case here. The Charge 3 can be found discounted across several online retailers, making it slightly cheaper than the Charge 4.

Most of the Charge 4’s features are present and correct in its predecessor, although unsurprisingly, the Charge 3 is slightly less well-equipped – it has a 20-watt output, 6000mAh battery and only dual external passive radiators. It does offer something the Charge 4 doesn't though - a built-in mic for taking calls.

Both models are good options. Ultimately, it depends on how willing you are to pay a premium for a boost in usability and performance. We would say, however, that if you want to keep your expenditure under £100, the 2019 What Hi-Fi? Award-winning wireless speaker, the Ultimate Ears Wonderboom 2, is our ultimate pick at £58 / $79.99 / $98 AUD

The JBL Charge 3 offers much of the Charge 4's features for less money. This five-star speaker has proven that it sounds great – and unlike its younger brother, you can take calls on it. View Deal

Of course, there are plenty more JBL Bluetooth speakers, both new and old, to consider. Most (though remember, not all) of the signature JBL features, such as JBL Connect+, the waterproof design and the 3.5mm audio input, span several models, but each speaker justifies its existence with unique twists to its specs.

JBL announced the Flip 5 last year – and we quickly reviewed it, giving it a glowing five-star review. The older Flip 4 will probably be around for a little while longer (and likely at a good price, too) but the Flip 5 betters it for sound, despite being devoid of microphone and aux-in port for wired listening.

The new Flip 5 sits just below the Charge 4 in the JBL line-up and, despite being smaller, is fairly similar in design. It offers 20W of power, a new racetrack-shaped driver and a 12-hour battery life, but you can’t charge your smartphone or tablet.

It is waterproof to IPX7 standards, but no longer supports JBL Connect+, having been updated to support JBL's new PartyBoost daisy-chain feature instead. It has no speakerphone functionality either, so no direct access to Siri or Google.

As for the sound performance though, it exceeds all expectations. As we concluded in our review, "if all you want is a portable Bluetooth speaker that sounds as good as £100 can currently buy, you’ll be hard-pressed to better the JBL Flip 5."

The latest Flip is a great portable speaker – intuitive to use with solid sound quality and it's small enough to slip into the side pocket of any rucksack. Just think carefully about whether you want your speaker to double as a charger or speakerphone, whether that aux-in port is necessary, or if you have other Connect+ enabled speakers you want to link up. If so, the Flip 5 – great though it is – might not be the one.

JBL Flip 5
US: $120 | UK: £93 | AUS: $119 AUD
It may be 'just' a wireless speaker – but oh, what a splendid-sounding wireless speaker you're getting for the money. It's JBL's newest, it's waterproof thanks to its IPX7 rating and the bass weight is really something for a speaker of this size.

This speaker is ideal for anyone after a more powerful and room-filling sound than the Charge 4 can muster, though be prepared to house a slightly larger unit. After all, compared to its smaller siblings, this is something of a brute!

The Xtreme 2 matches its predecessor in power, with a 40W output. It can wirelessly connect up to three smartphones or tablets at any one time, and can charge devices via dual USB ports. It offers 15 hours of playtime, a speakerphone, an IPX7 waterproof design and JBL Connect+.

The Xtreme 2 won our affection with its full, large-scale, dynamic sound and solid, chunky build. In fact, in our review we call it "one of the best portable speakers around", praising the Xtreme 2 for "sonic subtlety you wouldn’t expect from first impressions".

Bold and powerful, but capable of great subtlety, the JBL Xtreme 2 is a heavyweight with lots of bass and a durable, rugged build. Want a speaker that makes a huge sonic impression? Here it is.View Deal

The Pulse 4, meanwhile, is a unique offering and arguably the most crowd-pleasing speaker in JBL's arsenal, thanks to its 360-degree sound and ‘light show’ feature.

The Pulse 4 offers many of its siblings’ functions: simultaneous connectivity up to two devices and IPX7 waterproofing. However, it's one of JBL's newer models, so it supports PartyBoost like the Flip 5, meaning you can link up to 100 of these models. Uniquely, it can also light up your the music, given the fact it's wrapped in a layer of LEDs. And you can stereo pair two Pulse 4s by shaking one in the vicinity of the other. Oooh. It offers up to 12 hours of playtime with music and light show.

JBL Pulse 4
US: $250 | UK: £200
Much more than a Bluetooth speaker, the Pulse 4 also has the appeal of a disco light with its flashing LEDs. A 360-degree sound and JBL's newer PartyBoost feature also makes it stand out.View Deal

Almost top and tailing the JBL wireless speaker line-up are the Boombox and Clip speakers, respectively.

The Boombox is an all-singing-all-dancing... well, boombox. At 50cm long and weighing around 5kg, this Bluetooth speaker is the largest and priciest single-unit speaker in the company's line-up.

It's a real monster, with four active transducers and two bass radiators pumping out 60W of power. Battery life is a class-leading 24 hours, and every feature talked about above is present and correct.

While we'd say the Flip, Charge and Pulse models are more than suitable for moving around the house for bedroom, kitchen or bathroom listening, the Boombox really is a more serious, heavy-duty proposition.

JBL Boombox
US: $400 | UK:  £279 | AUS: $685 AUD
The largest and priciest of JBL's wireless speakers, the 60-watt Boombox is a serious proposition for those after considerable volume and sound coverage.View Deal

The palm-sized Clip 3 really is an on-the-fly-only option for when you want something slightly better and louder than your smartphone speakers. But it's ideal to throw in your suitcase for a holiday or use in a child's bedroom.

It still boasts a respectable 10 hours of playtime, is IPX7 waterproof certified and has a 3.5mm input jack. Also, (clue's in the name) it can clip on to things – neat.

JBL Clip 3
US: $50 | UK:  £48 | $88 AUD
One of the cheapest around, meanwhile, is a basic speaker and an ideal, easy-to-carry companion for anyone simply after sound quality better and louder than your smartphone's speakers. View Deal

Ultimate Ears
Of course, while JBL is a reputable wireless speaker brand, it isn't on its own. Ultimate Ears (often shortened to UE) is the firm behind some of our favourite budget, portable models, so if you'd rather stick to proven winners, the below may be of greater interest.

The aforementioned, Award-winning UE Wonderboom 2, pictured above, is one of our most popular tried-and-tested picks for those on a very tight budget. Ideal as a travel companion, it also impresses with its great-value sound, long battery life and Bear Grylls levels of durability, making it a fantastic alternative to the JBL Clip 3 and Flip 4.

Got a little more money to spend? Go for the UE Megaboom 3, it's louder and more impressive.

Audio Pro
Last but not least, we'd hugely recommend considering Audio Pro, who in the last couple of years has made a bigger mark in the wireless speaker market than any other brand. The biggest selling point of its wireless speakers is sound quality, which in our experience topples its competitors at nearly every price point it covers.

The products also all work in a multi-room capacity over wi-fi, and they tend to expand upon Bluetooth and 3.5mm connectivity with streaming service support such as Spotify Connect.

They're much more than just Bluetooth speakers, then. So if you're partial to their mostly box-like design, can afford their price tags and are after multi-room features in addition to Bluetooth, Audio Pro's offerings should be considered.

Our favourites? The Audio Pro Addon C3 is a previous What Hi-Fi? Award winner and packs all of the features mentioned above plus a 15-hour battery life and Alexa voice control when used with Amazon Music.

Now we've been through the models, we'll leave you to decide what's right for you. Oh, but once you've made your choice, don't forget to consult the list below for the best deals currently online right now.