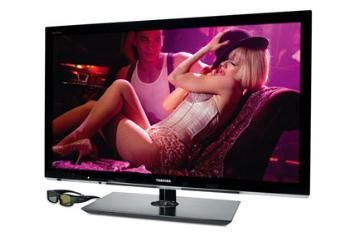 This is the best Toshiba set we’ve seen in ages

After a solid showing with its first 3D Blu-ray player, now it's Toshiba's first 3D TV that's being run through its paces.

Like the BDX3100, this 40WL768 flatscreen is an intriguingly styled product, but where the disc spinner's angular fascia divided office opinion, all admire the aesthetics here, particularly the combination of straight lines and round edges in the pedestal stand.

We don't often appreciate Toshiba TVs for their styling, so the company's collaboration with Jacob Jensen Design, which lists 27 years of work with B&O on its CV, seems to have worked a treat.

Terrific value for a 3D TV
One phrase often used when discussing a Toshiba product is ‘value for money', and this review isn't going to break with tradition.

We immediately go for the single pair of large but fairly comfortable 3D glasses (extra pairs will set you back £100 each) and pop Cloudy with a Chance of Meatballs into the Blu-ray player. The image that appears on screen is immediately impressive, with a palpable depth to the open scenes.

Each character is solidly drawn, the wide ranging colours are vibrant and punchy, and there's very little in the way of ugly double-imaging.

Not keen on a challenge
However, when you feed the Toshiba a challenging live action 2D Blu-ray like The Dark Knight, two clear imperfections rear up.

First, there are a couple of slight blotches from the edge LED backlight; and second, the 200Hz motion processor handles vertical motion with aplomb, but smears difficult horizontal panning shots.

On the occasions that these flaws are noticeable, it can be jarring, but for the majority of your viewing time you'll be enjoying a very clean, detailed picture with vibrant colours, impressive contrast, and extremely deep, solid blacks.

True, it doesn't quite have the edge definition and all out punch of the Samsung, but it's a worthy rival.