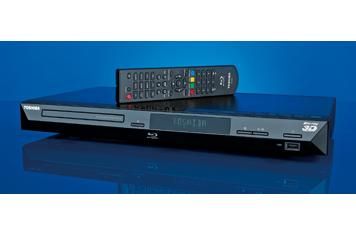 Though not exactly the most exciting player around, this Toshiba is a properly solid performer at an excellent price

The war between Blu-ray and HD DVD seems a million years ago now. But Toshiba's backing of the wrong horse meant that, by the time it released its first players – just this year – some of its biggest rivals were already on their third and fourth generation machines.

Clearly that's not a situation the Japanese company wants to find itself in again, so although not among the very first 3D disc spinners, the BDX3100 is at least out during the format's debut year.

A few flaws, but good for the cash
What's most impressive is the price. At £185, this undercuts many comparable players by a fairly significant margin, but there are some pointers to its budget status in the spec and build.

The most obvious saving seems to have been made on the display, which, with its green colour and basic digits, looks like a leftover from the days of VCR.

The remote is a rather basic, spongy-buttoned affair, too, and while we're not surprised that wi-fi isn't built in, the fact that it isn't available as an option is a disappointment – as is the fact that the ethernet connection is used only for BD-Live content; there's no on-demand content, no network streaming and no automatic firmware updating.

Even taken together, though, those flaws are really not hard to live with, and what the Toshiba does give you is a very good performance at a very affordable price.

Lovely lush style
Pop the 3D Blu-ray of Monsters vs Aliens into the drive and it's loaded quickly and displayed on screen in lovely, lush style.

The scene in which the army first confronts the alien robot is perhaps the most spectacular, with the barrage of missiles being a particular highlight. And while they don't stand out from the Toshiba to quite the same degree that they do from the class leaders they are cleanly and solidly defined.

Drop down to a mere two dimensions, in the form of The Karate Kid on Blu-ray and the BDX3100 proves to be the producer of impressively deep blacks and very vibrant colours.

In fact, that colour palette does lean a little to the ‘warm' side, but while that doesn't result in absolutely the most realistic picture, it doesn't look unnatural, either.

Clean upscaling too
Toshiba has long been a master of upscaling DVDs, and sure enough the BDX3100 produces perhaps the cleanest version of our Gangs of New York disc.

True, it's also a touch soft next to the very best, but we're sure there are lots of people who would be willing to give up a bit of sharpness to get rid of some picture noise.

The Toshiba does let itself down a little with sound – it's a touch ponderous and dynamically flat. But that doesn't take too much away from a very solid overall performance.