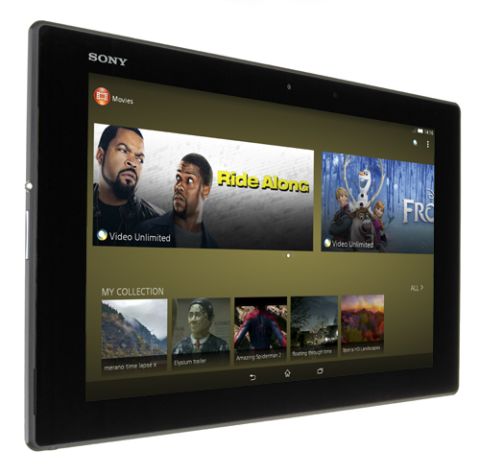 Another solid tablet from Sony, but it just doesn’t do quite enough against the mighty iPad

There’s no doubt that Sony is capable of combining mobile technology, design and good user experience into something great – just look at the fantastic Sony Xperia Z2; one of the finest smartphones we’ve seen so far this year.

But can Sony replicate this success in the trickier tablet arena? Building a 10in Android tablet isn’t quite as easy as building a great Android smartphone – and the iPad’s apps and home ecosystem has meant it has been the only tablet on many people’s wish lists for a long time.

Sony has made some tweaks to its outgoing Xperia Tablet Z – while also making the iPad look chunky with the Z2’s new build – in an attempt to make Xperia tablets a worthy rival. It has some great unique features (like waterproofing) that give it an edge.

But is it enough?

The soft, matte-back is lovely to the touch and makes more sense than an all-glass, fingerprint magnet design... so far, so good.

Sony’s OmniBalance design DNA is in full force here: an aluminium power button is halfway down the left-hand edge, with the familiar reflective skeleton frame that puts Samsung’s faux-metal to shame.

It’s a beautifully built device that looks worthy of the £400 price tag. It’s waterproof too, with an IP58 rating. That means you can drop it in up to 1.5m of water, if you really have to.

But the Tablet Z2 is not without its faults. It’s thin and light, yes, yet very wide, with retro-looking wide bezels.

The thin casework flexes too much, so much so, you worry it will snap; not a good feature in comparison to the solidity of an iPad Air.

The bezels give your hands somewhere to rest without covering the screen area, yes, but they also make the Tablet Z2 odd to use in portrait.

All that glass and bezel is very reflective too, making it frustrating to use outdoors.

It’s still 16:9 and Sony hasn’t decided to use 2K-or-beyond displays on tablets just yet, and – as a result – lags behind Apple, Samsung and Asus in the resolution wars.

Does it matter? For a large part, no – unless you’re working with a hi-res image on the tablet.

Text remains sharp, contrast is brilliant and viewing angles are top-notch. Of the Android screens we’ve seen, this is still one of the best.

The 264ppi iPad Air is sharper still though; when watching movies on the Apple tab, there’s slightly more fine detail next to the Sony.

The Tablet Z2 is also outperformed on motion, which, though generally smooth on the Sony, isn’t quite as flawless as on the iPad.

Colours edge towards the richer end of the palette – just like the Tablet Z – and some users will prefer that extra smidgeon of punch and vibrancy. But again, for contrast and natural colours, the iPad remains the best out there.

For tinkerers, an X-Reality setting is available in the display section – though be warned, this makes colours slightly too saturated and unrealistic to our eyes.

Sony has moved its stereo speakers around from the corner to the front of the Tablet Z2, no doubt to tempt tablet users who enjoy a Netflix movie while lying in bed.

There’s definitely room for improvement, though: vocals are clear and crisp, but it’s a small sound, which can verge on tinny.

The headphone jack is on the very left side of the bottom edge – a slightly annoying placement – but, as usual, this is the best way to appreciate the Tablet Z2’s sound quality.

Listening to Grizzly Bear’s Veckatimest, the Xperia sounds as clean and detailed as we’ve come to expect from Sony, with defined bass and solid rhythm.

It’s not quite the frontrunner the Xperia Z2 smartphone is though, lacking the dynamics and punch that only the iPad Air can deliver.

Sony keeps the OS simple, running the latest version, 4.4 KitKat, and the additions are its Movies and Music Unlimited services and Walkman app.

The Sony Tablet Z2 is very reliable in use and you won’t find any performance niggles. From running multiple ‘small app’ windows all at once to Android gaming, the Sony’s quad-core processor and class-leading 3GB of RAM handle tasks beautifully.

You can even hook up a DualShock PS3 controller if you don’t like touchscreen controls.

The 2.2-megapixel front camera is clear and bright for video calls and the 8MP rear camera takes reliably decent images too, especially outdoors.

However, the Tablet Z2 is an unwieldly piece of kit to use for pics; we would only look to it as a last resort.

One big advantage the Tablet Z2 has over an iPad is microSD expansion – the price of a 128GB microSD card is considerably less than the most expensive iPad Air unit, and could save media magpies hundreds of pounds.

The Tablet Z2 is pitched more as a stay-at-home tablet but the 6000mAh battery (seriously, where do they put it?) will last the day unless it’s used intensely.

Ideally, you’re looking at nine to 10 hours of use on average, and there’s the Stamina power-saving mode to keep it going that extra half hour on your commute.

We tested the wi-fi only version of the Tablet Z2, so it’s likely anyone using it with an LTE sim will have to be gentler with the battery throughout the day – or remember to charge it at work.

Overall, the Sony Xperia Tablet Z2 is an impressive piece of kit – with its superb screen and sound, battery capacity and user-friendly interface, it ticks all the right boxes to deserve a place on your shortlist.

It doesn’t merit the full five stars, however, for a number of important reasons – that reflective front and flexing chassis; lacking some detail and when it comes to Android, if compared to other tabs. But the major reason is this… the iPad is still out there, and nothing yet has knocked it off its perch.

MORE: Android L – Everything you need to know