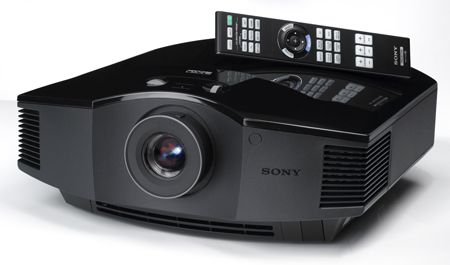 Sony has been getting very excited about 4K Ultra High Definition.

But not so fast. It’s good to aspire to bigger and better, but for now 4K is largely flag-in-the-sand stuff from the big players. If you’re in the home cinema market, the serious action comes in the shape of the Sony VPL-HW50ES, a £3000 full HD 3D projector. Core territory for projection enthusiasts.

This model sits above the entry-level VPL-HW30ES, which is now available for close to £2000, and brings with it a host of upgrades and, we hope, improvements. Going up against the Panasonic PT-AT6000E, our current award-winner and, soon, JVC’s forthcoming DLA-X35, which sits in the same price bracket.

The spectre of Sony’s 4K Ultra High Definition projector rears its head again as we pore over the list of features. Top of the list is Reality Creation, a ‘super resolution function’ first seen on the 4K UHD VPL-VW1000ES that promises improvements to colour and texture.

Claimed brightness and contrast figures have been boosted, too, with the VPL-HW50ES offering 100,000:1 dynamic brightness and 1700 lumens brightness compared to the VPL-HW30ES, which settled for 70,000:1 and 1300 respectively.

The styling hasn’t changed much on Sony’s latest projectors but that’s no bad thing. Over 40cm deep and wide, the VPL-HW50ES is big but with a stealth-like angular design. It’s nicely put together, looks as stylish as you’re likely to get for a projector and feels built to last.

Connectivity is largely tucked on the left-hand side of the projector as you look at it (above). Two HDMI inputs are joined by a component connection and a 15-pin RGB input. There’s a mini jack IR input and RS-232C connection for home installation requirements, too.

Set-up is a doddle, as is par for the course at this level with projectors with zoom and focus controls on the lens (below) that are simple to adjust. Up and running it’s worth pointing out that the projector is exceedingly quiet in operation, Sony claims around 21dB, which is a not insignificant bonus for a projector.

The Adventures of Tintin is a staggeringly good Blu-ray and it looks simply superb on the VPL-HW50ES. The level of detail is astonishing and the Sony retrieves every last morsel of the expertly animated characters. Colours are nicely balanced and there’s just a real subtlety to the picture.

We slip on the chunky but fairly comfortable 3D specs (rechargeable via USB) and try the 3D version of the film. Again, the overall picture looks great.

There’s no issue in terms of brightness or loss of punch, which can be a problem with 3D playback, while there’s a good sense of depth to the 3D effect without objects looking too detached or unnatural. Fast motion does still throw up some crosstalk, however, the picture losing some stability.

Back to 2D images and we check out some live action with Star Trek. Detail retrieval and the overall subtlety of the image is again striking, with great texture to faces and spot-on skin tones. It’s sharp, too.

We experiment with Reality Creation, which claims to restore missing data lost during the Blu-ray encoding process. It seems to have a similar effect to jacking up the sharpness – albeit with a little more subtlety. We like the extra detail but it can make for a slightly artificially enhanced feel. No surprise Sony gave you the option to turn it off and on.

Similarly, MotionFlow is a personal preference; we think it’s balanced best on the lowest setting. The Bright Cinema and Bright TV modes are more effective, claiming ‘signal processing improvements’ to improve visibility in a well-lit room – certainly it does make gloomier scenes a little easier to watch if you’ve got the lights on.

There are these tweaks to be made to your own personal preference but as we work through a variety of content, standard definition and HD, it’s clear to us that this is a supremely capable projector.

While Sony’s 4K Ultra HD kit might be grabbing al the headlines, for now we’re much more excited by this £3k full HD 3D projector.

If you’re serious about big-screen home cinema, then you’ll know this is something of a sweetspot for projectors – and the Sony VPL-HW50ES is a very sweet performer indeed, which means this product class is once more getting very tasty indeed.