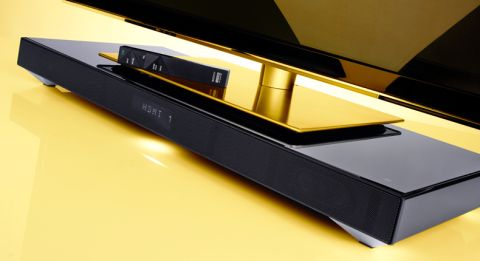 A stylish, feature-packed answer to the budget soundbase question

There’s no doubt that Sony’s HT-XT1 cuts a fine shape on our test rack.

Sure, it’s a rectangular black box like most soundbases tend to be, but with its scratch-resistant glass top, touch-sensitive controls, LCD display and slender metallic frame it pulls off that look with a bit more elegance than many others.

It’s not just its looks that have been well considered though – flexibility as to how you’re going to want to use this soundbase has been given plenty of thought too, with more connections than we’re used to at this price.

The HT-XT1 offers you three HDMIs, one optical input and a 3.5mm jack to plug your kit into, plus an ARC-compatible HDMI out.

Add to that Bluetooth with NFC connectivity for music playback, and it’s easy to see this little box is trying its hardest to impress.

A stylish, slimline remote comes with the HT-XT1, featuring a handful of buttons for the main commands plus a slide-down panel that hides the controls for delving deeper into settings.

Some of the options include sound modes, such as ‘movie’, ‘sports’ or ‘music’, and a voice booster in case dialogue is too quiet.

Sound modes are worth playing with to see what you prefer – we find the portable audio setting gives the best balance, though ‘movie’ mode offers a richer, fuller sound to your blockbusters.

‘Voice’, on the other hand, is best left alone if you can. The midway setting can help if you’re really struggling to hear but go to the maximum and you will lose out in both weight and dynamics.

You can also control the soundbase with Sony’s Songpal app for iOS and Android; it’s well-designed and easy to use. It also features handy shortcuts to a number of streaming services.

We choose Fury to put the HT-XT1 through its paces, and skip to the Tiger tank battle scene. At the first devastating strike from the Germans, the Sony jumps into action, with a crisp, clear sound that’s detailed and full of excitement.

Every tank-gun blast is punctuated with plenty of power and weight in the low end, while dynamically it’s expressive enough to show off the depth and impact of every blow.

The spread of sound is pretty impressive too – it’s big enough to fill our listening room, and there’s a decent sense of space compared with the TV2, which sounds a little more closed in.

However, as the fight intensifies and the zing of gunfire increases, it’s hard to ignore the Sony HT-XT1’s rather hard edge in the treble, which gets worse at volume.

Not only is this noticeable in big action scenes, but also in dialogue, which can sound a little thin and fragile compared with the more solid TV5.

This isn’t helped by a midrange that takes a back seat. You can use the tone controls to help with this but overall it’s still outsmarted by the likes of the TV5.

Sony’s hit the ground running with the HT-XT1. We really like this soundbase: the wealth of connections, features and the smart design make it an attractive buy, and the punchy, energetic sound is bound to have its fans.

It’s worth an audition.