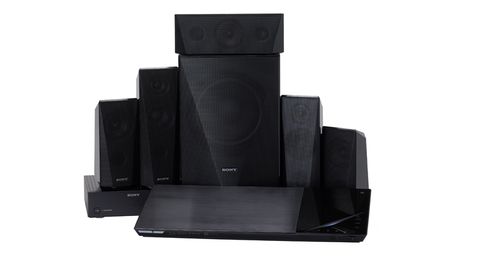 Best cinema system, Awards 2014. A well-featured package that delivers an exciting and convenient home cinema performance for a great price – Sony’s on to a winner

Fancy a decent home cinema system in your living room, but wish someone would pick all the components you need, put them all in one box and bill you only £500 for the lot?

Let Sony be your personal shopper: the Sony BDV-N5200W is a fantastic all-in-one package that holds all your cinema needs.

Made up of a Blu-ray player, five compact speakers, a wireless subwoofer, a 5.1ch amplifier and all the latest smart features you can think of – this neat, compact system will bring the cinema experience that bit closer into your home. Just add a TV.

Play the Blu-ray of The Amazing Spider-Man 2 and the Sony BDV-N5200W system zings between the 5.1 DTS-HD Master Audio soundtrack with a remarkable amount of precision and authority.

The sound is crystal clear and oozes with subtle detail. There’s plenty of excitement as special effects – Spidey’s web-slinging across skyscrapers, Electro’s crackling electricity, multiple explosions – are steered across the five speakers with lively, fast timing.

It’s a great listen. We particularly like how Electro’s Gollum-like whispers sound crisp and menacing coming from the rear speakers – place them just behind your sofa and there’s a genuine sense of atmosphere.

That wireless subwoofer (which you can easily tuck into a corner and forget about) is the unsung hero of this system. It sets the weighty, rumbling foundation for Sony’s sound, lending depth, punch and authority to any film.

Dynamics are free to soar in an open and wide soundfield, and it’s easy to place objects, dialogue and effects accurately.

Switch to a music Blu-ray, and the Sony has a respectable sense of rhythm and punch, but could be a touch subtler. Justin Timberlake’s live performance is full of funky beats and layered harmonics, while Beyonce’s powerful vocals sound fluid and dynamic.

Streamed music (over Bluetooth or DLNA) may not have the solid cohesion and musicality that you’d get from a dedicated hi-fi system, but it’s a convenient way to free your music collection from a smart device.

It’s a testament to Sony’s sonic skill that whatever you’re watching – films, TV shows, quiz shows – sounds interesting even at low volumes. This is particularly evident with dialogue.

Voices sound crisp and expressive through this Sony system. There’s a hint of hardness that creeps in at the top end, but only if you push the volume up to neighbour-bothering volumes.

We know how good Sony Blu-ray players can be, and the one provided with the BDV-N5200W package does its lineage proud by delivering a beautifully punchy and clean picture.

Motion is smooth and stable. Detail definition is superb, with strands of hair and threads distinguishable in The Book Thief’s many-shades-of-sepia colour palette.

Even when watching Pointless or Doctor Who on telly, colours are rich and vibrant while maintaining a natural tone. The picture shines clear and bright, while black scenes are inky dark without swallowing up too much detail.

Skin tones are convincingly shaded, too. There’s an expected drop in resolution when watching DVDs or standard-definition content, but it doesn’t stop us from enjoying Friends re-runs on Comedy Central.

Blu-ray-in-a-box systems can sometimes be fiddly to get set up, but assembling the Sony BDV-N5200W was a breeze.

For one, the well-built speakers are small and easy to place around the room.

While they can be placed on top of your TV stand or on a wall for neatness, we’d suggest investing in speaker stands for the better support and positioning. The compact centre speaker shouldn’t block the bottom half of the TV either, so you can comfortably place it directly in front of your screen.

The wires are all helpfully colour-coded, too. This speeds up the set-up process considerably, as you know which speakers to plug into the main unit (front, centre and subwoofer), while the rear speakers plug into a separate wireless amplifier that can be neatly tucked away at the back of the room.

It may not be an entirely wireless system, but it does minimise a mess of wires across the room.

While there’s no auto-calibration method like with dedicated AV amplifiers, there is scope to adjust the level and distance for each speaker manually.

It’s easy enough for a layman to get to grips with, and means you can tweak the centre’s sound if you feel the dialogue could be more prominent, or if the rear speakers need to be subdued.

We’d suggest you calibrate the speakers (using a sound pressure level meter, ideally) before proper listening, and to let the system run in for at least a day to bed in.

The menus, while slightly labyrinthine, are quick and easy to scroll through using the supplied remote. It fits nicely in hand, and the buttons are logically laid out.

You can use the TV SideView app (free to download for iOS and Android devices) as well, which offers a detailed electronic programme guide, TV information and easier access to smart apps.

If the Sony’s performance wasn’t enough, there’s also a huge amount of smart features packed into this box of surprises.

There’s Bluetooth streaming, near-field communication (NFC) pairing and DLNA certification on board, letting you stream music from a variety of devices.

If you have music on a smartphone, laptop or NAS device, you can stream them to the Sony system. Connections aren't plentiful, but then again you already have your disc-player and 5.1ch amplifier in the box so we won’t moan about the limited variety.

There are two HDMI inputs for plugging in your set-top box or games console, an HDMI output, an optical input and a pair of RCA plugs.

Videos and songs stored on a flash drive or hard drive can played using the USB port – it supports all popular files, from MP3s to FLAC.

There’s little this Sony BDV-N5200W can’t do. As a home cinema system, it’s as tidy and convenient as it can get.

And you don’t have to cash in your life savings either – £500 is a fantastic deal for what you’re getting. You could spend just as much on just an AV amplifier (which would admittedly give you a more revealing and powerful performance).

But the Sony BDV-N5200W strives to give you an effortless system, one where everything you need for a decent home cinema system is packed into a single package.

It’s an accomplished performer, too, and a fantastic step into the delights of home cinema for an AV novice: well worth an audition.