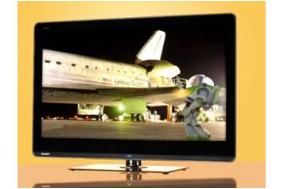 Is extra yellow as good as an extra dimension? Perhaps not, but that doesn’t stop the Quattron being a fine TV

Quattron is the name Sharp has gone for with its new range of TVs. It sounds a bit '80s to us, but at least it's vaguely related to the range's USP. You see, these sets have added a fourth, yellow subpixel to the red, blue and green arrangement of ‘normal' LCD TVs.

When Sharp announced it was adding this extra subpixel, there was much jesting about how yellow the pictures would be – and ‘1000 times more colour' sounds like one of those ridiculous and unprovable boasts.

But the truth is, the LC-46LE821's colour palette is lovely. Fed An Education on Blu-ray, it produces vitality and vibrancy, but not at the expense of naturalness, so the scenery of Paris is bright and enticing, but skin tones remain organic and lifelike.

Edge-lit, so slim design
The '821 is also another first for Sharp in that it boasts LED edge lighting, rather than the direct LED backlighting of the LE700-series models.

This does allow for a nice, slim profile, but as other companies have proved, it is possible to combine a full array of LEDs with a slim chassis. More importantly, the '821's backlight isn't as even as it should be.

True, it's much better than the clouding that plagued the last generation of Sony sets, but there are still odd patches visible in the gloomier scenes of The Dark Knight.

Slower pans are pretty stable, but when asked to deal with the fight scene in the Hong Kong skyscraper, the set creates an element of unnatural shimmer to edges as it attempts to guess the next move.

Detail, though, is very impressive. The scars and cuts all over The Joker's face are brilliantly defined, adding to his overall creepiness, while the Training Day DVD is upscaled in crisp, clean fashion, with vibrant, balanced colours once again.

There are lots of positives to the Freeview performance, too. As well as the impressive detail levels, minimal noise and general punch, there's a ‘Time Shift' function that uses 8GB of onboard flash memory to allow for live pausing for up to 150 minutes.

All-in-all, this is a very impressive debut for Quattron. The name might not be cool, but the TV certainly is.