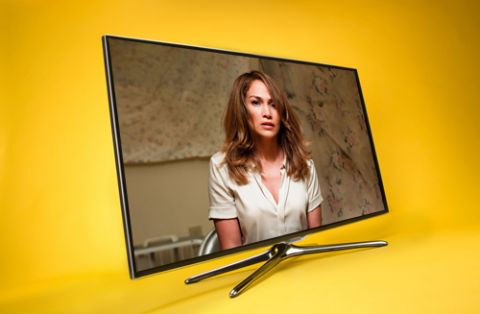 Not a class leader, but this Samsung offers a lot for your money

The Samsung UE40F6500 is a bit of a bargain 40in TV. It’s packing many of the features found in more expensive sets, and has gorgeous looks to boot.

Let’s start with the looks. The UE40F6500 is a very flat 40in screen with a slim bezel, planted atop Samsung’s tried-and-tested metal-claw stand. At the bottom of the screen is a small lip with Samsung’s logo, which glows proudly until you turn it off in one of the settings menus.

Look around the back and you’ll find a decent set of connections: three HDMI inputs, three USB, component, composite and RGB Scart. There’s also a headphone jack and an optical output.

All plugged in, we dive into Samsung’s menus, which are logical and responsive. Most options are where you’d expect, and accessible within a reasonable number of button presses.

Setting things up is a swift process thanks to a standard introduction wizard, which takes you through network connections (wi-fi or wired) and channel scanning (Freesat and Freeview HD).

Tweaking the picture with our THX Optimiser disc takes only a few minutes more. There’s an option to copy your picture settings to all inputs, which saves a lot of hassle and gives us more time to play with the rest of the TV.

As is increasingly common these days, there are a number of ways to interact with the TV. There are two remote controls: a traditional one with ergonomic black plastic and squidgy buttons, and a sleeker one with few buttons and what looks like brushed metal.

Those unfamiliar with Samsung’s Smart Touch remote will encounter a slight learning curve. It has only a few of the more important buttons, with the rest replaced by a touch pad. This works much like a smartphone, where you slide your finger to indicate what you want on an on-screen menu, rather than punching keys. It might feel slightly alien at first, but it’s intuitive and highly responsive.

This remote control can also be used for voice commands. Well, supposedly. You press the ‘Voice’ button and wait for a colourful prompt on the screen, then say the likes of “volume 12” into the microphone on the remote.

It’s a nice idea, but in practice this rarely works, and is more likely to frustrate. Samsung still has a long way to go before we opt for voice control over the traditional go-through-some-menus approach.

What does work well for controlling the UE40F6500 is Samsung’s Smart View app, which functions as a replacement remote control. It offers you the volume/channel changing, number-tapping abilities of a regular physical unit, and adds the ability to look at a programme guide while still watching TV.

You can also duplicate the current TV feed onto your phone or tablet and take it elsewhere in the house. Sadly, you can watch only one channel at a time, so the app is not a solution for when you lose the fight over the TV remote.

We had some issues with compatibility for the app, however. We managed to download it on an iPhone 5 and a Samsung Galaxy S2, but not on quite a few other Android devices. According to Samsung, the app definitely works on its own Galaxy S3, Note 2, Tab 2 and Note 10.1. Choose your weapon wisely.

With everything configured, and an array of controls in front of us, we get started with some live TV. Watching This Morning on ITV, we find colours to be nicely judged. Somebody’s just made a cake, and on the Samsung it looks deliciously detailed without being overly sharp.

Colours are nicely judged, and fruit looks natural. There’s also a good balance of light and dark elements. There’s a bit of softness and noise on standard-definition channels, but that’s par for the course. This is a very good tuner.

Next up is DVD, and we give Return of the Jedi a spin. The Samsung is a decent upscaler, with a good amount of detail, even if it’s sometimes a little sharp. Black levels are impressive: not totally black, but deeper than on many other contemporary rivals. Motion handling is fine, panning smoothly from the Death Star to the forest moon of Endor.

Moving up to high definition with a Blu-ray of The Amazing Spider-Man, the UE40F6500 begins to struggle against some more expensive rivals.

As we watch The Lizard attack Spider-Man in the sewers of New York, the dark picture looks a little washed out compared with the Panasonic TX-P42GT60 and Samsung UE40F7000, with less subtlety in shading.

It also loses out when it comes to detail, with the Sony KDL-42W805 doing a more convincing job of reproducing the texture of Spider-Man’s mask.

Time to try out the 3D, and we examine the two pairs of active-shutter glasses that Samsung provides. They’re light in weight, but not the most comfortable 3D glasses we’ve tried. After pairing them with the TV, we watch Life of Pi 3D.

The picture has a lot of detail and there’s a decent sense of depth, but it’s not as dramatic or obviously dimensional as that on the Panasonic TX-P42GT60. There was also a noticeable amount of crosstalk: as some flamingos crossed the screen, there seemed to be more necks than there were large pink birds.

Audio quality is fairly typical for a flatscreen TV: it’s acceptable for casual viewing of the news, for example, but watch anything else and you’ll notice a lack of weight behind the sound. It’s less clear and a little more substantial than the sound on the Sony KDL-42W805.

When you’ve finished watching films and TV shows, there’s still plenty to play around with. The centrepiece of the 2013 Samsung TV experience is the Smart Hub. It’s a carousel of panels, divided into five categories:

Social: This is where you go for all things related to social networking, such as Facebook and Twitter.

Apps: Your collection of apps, in neat tiles. There’s a line of recommended apps at the top, while your own downloaded ones appear below.

On TV: Just want to watch TV? You’re in the right place. You can access the programme guide, switch to a timeline view, record content and see previews of what’s on next.

S Recommendation is a feature that looks at your viewing history and recommends similar content. The more you watch, the more it can learn from.

This 40in LED TV does a good job overall, even if it’s not class leader. It holds its own with its tuner and when playing DVDs, but Blu-ray pictures do reveal that it’s not as capable as some rivals.

If your budget is strictly three-figures, however, this is a strong candidate.