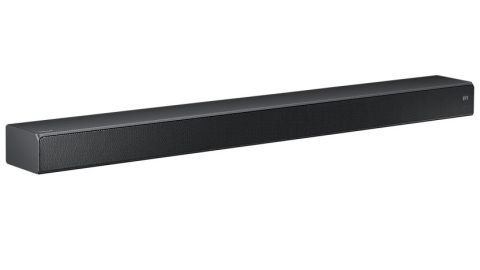 A big soundbar with a big sound, and a serious all-in-one streaming solution too

The Samsung HW-MS750 is a big soundbar that's capable of a big sound. And it comes with a price tag to match.

It's fair to say premium soundbars like this one have outgrown their original use. No longer content with simply making TVs sound better, they now qualify as complete streaming systems in their own right. And the Samsung HW-MS750 has the connections to match.

Alongside the typical soundbar connections – HDMI sockets and optical and 3.5mm inputs, 4K and HDR passthrough – are Bluetooth and wi-fi, the latter of which opens this soundbar up to a world of online music streaming.

Using the free Samsung Wireless Audio-Multiroom app, you can play from music services including Tidal, Spotify, TuneIn, Deezer and Qobuz as well as NAS drives – although the app has some problems delving into all our folders.

The HW-MS750’s versatility doesn’t stop there. Owners of compatible Samsung TVs can connect them wirelessly to the soundbar.

A Samsung TV remote can also operate the soundbar, although the supplied wand is just as nice to use - its thin, roughly hand-length size and useful lever for notching up volume is agreeable.

An optional mount kit can also fix the soundbar to a TV, allowing one cable to power both.

There’s also the option for HW-MS750 owners to expand and upgrade, whether that’s by adding the SWA-W700 subwoofer (£600, or £400 when purchased with the soundbar) or the matching wireless rear speakers (£180 per pair).

The Samsung’s size might not suit everyone’s tastes though. It’s almost the width of the Samsung 65in TV we lay it in front of, making it wider than, for example, the Dali Kubik One, which is big enough as it is.

But at 8cm tall it's half the height and, unlike the Dali, almost guarantees zero screen blockage.

The wide Samsung may not be for everyone’s TV rack, then, but its sound will surely have more universal appeal.

We play La La Land and the HW-MS750’s 11 front- and upward-firing speakers do a fine job of spreading the jazzy, camp number in the opening highway dance sequence around our test room.

That breadth and space it offers captures the ambience and chatter of the large restaurant Ryan Gosling performs in, providing a sonic canvas as wide as the Hollywood cityscape he and Emma Stone look out over.

Elsewhere, its talents are transformative compared to those of TV speakers – as you’d expect from a £700 soundbar. There’s more weight to piano keys – they don’t sound like twinkling bells as they do through TV speakers, but have harmonics and dynamic variation.

In fact, this compelling soundtrack has fine definition throughout, from cymbals to cellos and everything in between – pianos, trumpets and drums.

Woodwinds playing behind quieter scenes have due presence, and dialogue-driven scenes reveal the Samsung’s aptitude for midrange expression. Its buoyant character delivers the cast’s version of A-ha’s Take On Me with pleasing energy, too.

We’d recommend adding the subwoofer at the discounted price. It feels like the last piece of the sonic puzzle, integrating well with the bar and adding a solid base (and bass) layer to the Samsung’s presentation.

During Netflix’s remake of Death Note, it gives grumble to revving police cars and weight to creaking machinery as well as atmospheric echo in underwater scenes.

What the Samsung HW-MS750 can’t match with any accessory, however, is the Dali’s class-leading levels of clarity, transparency and timing - it's particularly noticeable when we stream Kendrick Lamar’s LOYALTY via Tidal.

The earth-moving bassline doesn’t weave around Lamar’s lyrics as convincingly. The Dali better seizing the rhythmic relationship between the musical layers in the track.

The Samsung HW-MS750 isn’t Samsung’s first soundbar, but it is one of the best we’ve seen from the company.

It’s a serious soundbar, especially when it comes to music streaming options and filling a large room.

If it had a touch more transparency and better timing, we’d be looking at (and listening to) a five-star product.