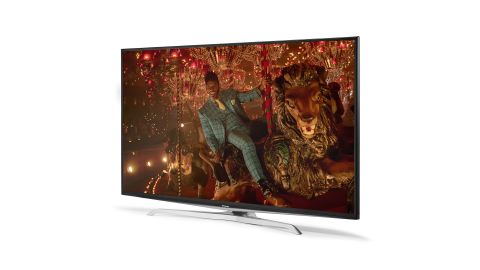 While it doesn’t quite rewrite the budget TV rulebook, the Polaroid P49UPA2029A is a good deal better than expected

Even the most optimistic of tech buyers would have limited expectations of a TV costing just £349, particularly one branded Polaroid and exclusively available through Asda supermarkets.

But the Polaroid P49UPA2029A smashes those expectations. It’s a 49in TV that crams in 4K, a healthy smart TV platform and support for HDR10, HLG and Dolby Vision, yet costs less than a third of our current favourite 49 inch TV, the Sony KD-49XG9005.

Clearly you wouldn’t expect this Polaroid to be up there with the Sony in terms of performance, but you might be surprised at just how accomplished it is for the price.

There’s little in the design to disguise this Polaroid 4K TV's budget credentials, with the glossy, black plastic casework harking back to affordable models of old. The spider leg-like pedestal stand looks a little odd in its contrasting silver finish, but the bezels on the top and sides are no thicker than those of most premium sets at this size, with only the lower lip proving unusually thick.

There are plenty of connections arranged across the back and sides, including three HDMIs (one of which is HDMI ARC-enabled), two USBs, optical and headphone outputs, and an aerial socket. There’s ethernet, too, for those who want a hardwired internet connection, but the Polaroid also has built-in wi-fi.

It is worth connecting the P49UPA2029A to the internet, as it boasts a fairly robust smart platform. Netflix and Amazon Prime Video are both on board with full support for 4K and Dolby Vision, BBC iPlayer, ITV Hub, All 4 and Demand 5 are all neatly incorporated in the Freeview Play package, Rakuten gives you pay-as-you-go access to blockbuster movies (albeit in 1080p), and there’s Deezer for music streaming. All of the apps are quick and easy to access via the straightforward, but somewhat rudimentary, operating system.

There are also shortcut buttons for Netflix, Amazon Prime Video, Freeview Play and YouTube on the remote, which is better than you might expect – sensibly laid-out, uncluttered and with a satisfying click to the buttons. There’s even a ring of light around the ‘OK’ button to help you find it in the dark.

The Polaroid P49UPA2029A lacks most of the fancy processing found on more premium TVs, but that does at least make it straightforward to tweak. We find the ‘Natural’ preset to be the most favourable place to start, and we adjust it by turning off Energy Saving, Dynamic Contrast and Noise Reduction, and by taking a few points off Colour.

Tailored accordingly, the Polaroid produces a surprisingly satisfying picture. While clearly not as punchy as a more expensive set, the P49UPA2029A is bright, sharp and detailed, and capable of demonstrating the benefits of 4K and HDR. Colours are broadly natural and correct, avoiding the common mistake of going too vivid.

Motion is good, too – there’s little to no processing going on, so no chance of the dreaded soap opera effect making an appearance, but the set exhibits no more judder or blur than do most premium models.

There are limits, of course, with the Polaroid lacking the tonal nuance of more sophisticated sets. The broad strokes are handled well, but it can make skin tones, in particular, look a touch unsubtle in their shading.

The backlight is limited, too, both in terms of not allowing much in the way of black depth and in the lack of local dimming. In other words, contrast is limited and colours are a little less rich than they might be. But, while the backlight is a bit grey, it is at least consistent and free of blotchiness.

The Polaroid is actually better suited to SDR content, perhaps because it sits more comfortably within the set’s technical limitations. Playing Fargo on Blu-ray we’re impressed by the balanced, natural delivery. There’s plenty of sharpness, lots of detail, and the film grain is neither exaggerated nor downplayed. There’s still a relative lack of black depth and richness to colours, but it feels as if you’re seeing the film more or less as the Coen’s intended.

Switch to standard-def via the built-in tuner and, as long as you’ve dialled the settings down a little, the performance is perfectly acceptable. A more premium TV will produce more punch, and also balance sharpness and smoothness more effectively, but this is still a natural performance with control and clarity.

A little surprising is the Polaroid’s input lag of just over 28ms when Game mode is selected, which is low enough to be practically imperceptible to all but the most hardcore of players.

The Polaroid’s built-in speakers are a touch crude, particularly at high volumes, but the sound is impressively clear and direct, with a decent weight to the lower midrange. This is a clean delivery, too, with no brightness or sibilance.

In other words, the audio performance is similar to the video performance; lacking a little subtlety and sparkle, but more accomplished than expected and more than good enough for everyday use.

That said, we’d still recommend adding a soundbar and you can improve upon the Polaroid’s audio performance without breaking the bank, thanks to something like the JVC TH-W513B, which currently costs under £50.

Expectations may have been low, but the degree to which this 49-inch Polaroid 4K TV exceeds them is still impressive. Comprehensively specified, easy to use and surprisingly capable of getting to the heart of what you’re watching, this is a much better TV than its name, availability and price tag might suggest.

Ultimately, you can get a more dynamic and sophisticated performance by going smaller or spending more, but if you absolutely must have a 49-50in TV and are on a limited budget, the Polaroid P49UPA2029A is well worth a trip to Asda.