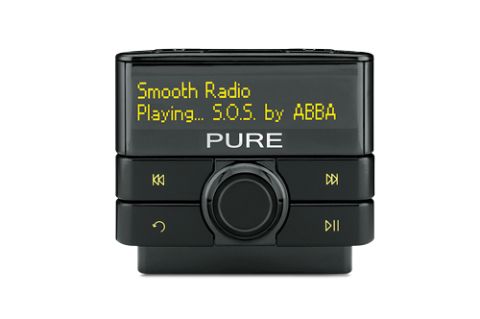 In-car DAB is great, and if your car doesn’t already have it this is a pretty neat way to add it

The Pure Highway 300Di is all about future-proofing. The digital radio switchover may have been delayed, but it is going to happen eventually. And when it does, it’s estimated that as many as 25 million cars will be left without a radio signal. The solution is an aftermarket DAB, and who better to than the DAB radio masters at Pure?

The Highway 300Di consists of three parts: a main unit with all of the connections, which sits behind your dashboard or in the glovebox and is wired into your existing stereo, a windscreen-mounted aerial, and a controller.

While the complexity of installation depends to an extent on your car (of the three cars we had it installed in, the Fiesta was apparently by far the simplest), this is absolutely intended as a professional job that can involve taking apart the entire dashboard. Even watching it being done made us feel a little queasy.

Still, once everything’s been put back together, the system’s rather neat. The little controller sits in a cradle on your dashboard when in use, and can be removed when you park.

It has a bright, green, OLED display that clearly delivers station and track info. A small scroll wheel on the front lets you change stations and inputs. It’s pretty easy to add favourite stations, so you won’t have to scroll through lots of rubbish to get from BBC Radio 4 to TalkSport.

The advantages of having DAB in your car are obvious. You get stations that aren’t available on analogue, such as BBC 6 Music and Planet Rock, and non-FM stations such as BBC Radio 5 Live are suddenly much clearer and cleaner.

DAB coverage is far from perfect, but we’ve been genuinely surprised by how rare dropouts in signal have been. It’s well worth checking the map at ukdigitalradio.com to check if the areas you regularly drive are covered before buying, though. Drivers in rural Wales and Scotland are most likely to be disappointed.

DAB isn’t the only extra function added by the Highway 300Di. That main unit also has connections for iPods, standard USB memory devices and a 3.5mm aux-in, and your installer should be able to route the appropriate cables to where you need them.

Those who use their iPhone as a sat-nav can use a 30-pin or Lightning cable to keep it charged and access all of their music from iTunes or an app such as Spotify, and Android or Windows Phone 8 users can do the same with the USB connection and 3.5mm cable.

Or you could just leave an iPod Classic or USB mass storage device in the glovebox, giving you a massive digital jukebox to listen to wherever you go.

And how does it all sound? Well that will depend massively on the quality of the amplifier and speakers already built into your car, but having experimented with three very different models we can say that the Highway delivers very clear, crisp and neutrally balanced sound.

Essentially, it doesn’t colour the music or chat, so it’s your car stereo’s character that will dictate the overall balance, just as it should.

So while the delay to the digital radio switchover means a DAB radio in the car isn’t essential yet, having lived with it for a little while now we wouldn’t want to go back.

If you’re buying a new car now we’d recommend ticking the box for the optional DAB radio, but if you’ve already got a DAB-free motor, this is a great way to add a whole load of extra functionality, as long as you don’t mind someone taking your car apart to make it happen.