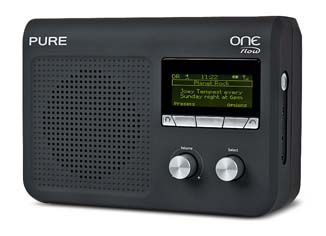 Best internet radio up to £150, Awards 2012. Great value for money, its secret weapon is the killer Pure Lounge app

While some radios, such as the Q2 Wi-Fi Internet Radio or Revo Axis XS go for quirky button-free systems or colourful touchscreens, the Pure One Flow is about as unassuming as you can get.

You might be forgiven for thinking that this £100 radio is as stripped-down in features as it is in looks – but underneath that no-nonsense exterior lies a pretty serious spec list.

As well as FM and DAB, for instance, you can access internet radio (denoted by the ‘Flow’ in the name), stream music from a PC or Mac, and even play music from your iOS or Android device with the cloud-based Pure Stream, using the free Pure Lounge app.

The One Flow also accepts an optional rechargeable battery for portable listening.

We’ve tested quite a few £100-ish radios over the years, and the only one to come anywhere near the One Flow’s performance is the Q2 (which is less well-specified).

Any radio is going to be subject to the whims of the broadcast it’s receiving, but the Pure sounds surprisingly weighty, solid, spacious and composed for its size and mono design.

It tracks vocals well and lends creditable beef to basslines, while its treble performance doesn’t veer towards the brash – which can’t be said of many other radios around this price.

Our only gripe – and it’s a minor one – is with the navigation: the small display and rotary dials can make text entry a bit of a trial, especially if you have a long wi-fi password, but realistically this only needs doing once and won’t be an issue for most users.

Products don’t win Awards for nothing – and this one convincingly scooped two gongs in a row. The opposition has got its work cut out of it's going to stop this Pure from being a shoo-in for three come 2013.