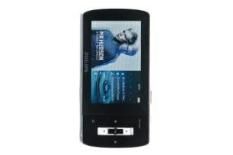 Compared to its closest rivals, the Philips GoGear Muse is a slightly different take on the media portable format.

The Philips is a large device, with a 400 x 240, three-inch screen, but the landscape-only layout is a curious choice as our instinct is to turn it around.

What's more, if you're not happy with your key controls on the right of the screen (left-handers, for example), then you're stuck.

We do keep wanting to touch that big expanse of screen, but it won't do any good – it's all button controls here.

The bundled installation CD includes the latest Windows Media Player for syncing content, or you can simply drag and drop files. MP3, WMA, WAV and FLAC music is compatible and this model gives you 16GB worth of capacity (there are 8GB and 32GB versions, too).

Compatible with iPlayer
As well as DivX, MP4 and AVI, you can also add downloaded iPlayer videos. We had some issues with rights management, and found not all BBC programmes have portable-friendly versions, but we got there in the end.

There's no denying the interface is slick and easy to use, and it feels like a premium product. In use, the three-inch widescreen is very watchable.

Video is sharp with rich colours, and despite a hint of noise and slight struggles with deep black levels, we like what we see.

A couple of design foibles
However, it doesn't quite match the best for detail. As for the bundled noise-cancelling earphones, we're not convinced sonically or in terms of reducing unwanted sound.

There are reasons to investigate the GoGear Muse: the big screen is easy on the eye; iPlayer-compatibility is great; and it looks and feels good in the hand. It's just a shame about a few of the design foibles.