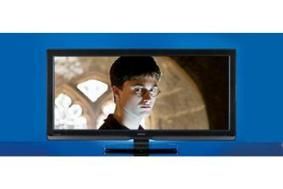 What we have here is a television set no taller than your average 42in flatscreen, but with a diagonal screen size of 56in and an aspect ratio of 2.39:1, or 21:9. And there is a clear logic behind what might be seen by some as madness.

Philips has designed the '9954H specifically to display movie content filmed in CinemaScope (such movies range between 2.35:1 and 2.40:1). The main benefit to this is the removal of the black bars from the top and bottom of the screen when you're watching a CinemaScope film.

Philips also claims the benefits include no picture loss. Well, you'd think that would be the case, but even in 21:9 Cinema mode, careful examination of the picture shows that the picture is cropped along the left/right-hand edges. There's only a couple of centimetres of information missing on either side, but movie buffs could quite easily feel short-changed.

Another area of concern is foreign films that contain English subtitiles. We watched the Old Boy Blu-ray, and had to select the set's Cinema 21:9 subtitle mode to show all the subtitles on-screen.

But, in order to accommodate them, the TV has to squeeze the picture from the bottom up, thus distorting the picture. Philips claims this won't be an issue if you use the TV with its forthcoming BDP9100 Blu-ray player.

Even Blu-ray is scaled a little
Because of the dimensions of this set, the resolution of this screen is a higher-than-Full-HD 2560x1080 pixels. This leaves the TV with some scaling to do with Blu-ray's 1080p/24fps images – and even more if you want the picture from the TV's Freeview tuner to fill the screen.

In practice, you're better off watching Freeview and gaming while using the screen's 16:9 picture format and having very thick black bars on the edges of the screen. Stretching these images to fill the 21:9 screen results in a picture that's seriously cropped.

And, to be fair, the Philips does a fine job with Freeview broadcasts. Traces of noise are present, but provided you're sitting a suitable distance away from the screen, there's little to complain about. Detail levels are on par with a good 50in set, and colours are well balanced.

Switch to the I Am Legend Blu-ray, though, and the Cinema 21:9 really shines. Those wide, panoramic shots of a deserted New York City look sensational (though the image is very slightly cropped down the sides). As Will Smith hurtles along in his Mustang, the set keeps a good grip of motion, while the car's red paint stays on the right side of vivid.

You have the option of turning on the set's Perfect Natural Motion picture processing, but ironically, some viewers seem to find that this setting actually makes the picture appear more unnatural.

When you consider the size of screen being filled, the Cinema 21:9 produces edges that are well-defined, whether they are the sides of the skyscrapers or the contours on Will Smith's rifle.

Impressive sound quality
It's always nice, too, to come across a flatscreen TV that doesn't sound like two wasps scrapping in a Tupperware box.

The Cinema 21:9 is decent in this department, the built-in speakers sounding reasonably solid. Admittedly, there isn't much in the way of low-end grunt, but they still sound detailed and not overly lean.

As is befitting of a product at this price, Philips hasn't scrimped on connections, features and the overall quality of the user experience.

Ambilight Spectra 3 emits a colourful glow from the rear of the TV on three sides. The set also comes with a weighty remote control that looks stylish and is a delight to use.

Philips' on-screen menus boast a brand new look, with cool blue icons and the ability to name and assign inputs accordingly. On the subject of inputs, few will have any complaints with the five HDMI sockets on offer (four on the back, one on the side).

The TV is also DLNA compliant and can be connected to the internet through the ethernet socket or the TV's integrated Wi-Fi. You can then access Net TV, a collection of online widgets for services such as You Tube.

The set takes seconds to hunt down and hop onto a wireless network, and many of the services work extremely well, including the Tunin.FM widget that provides internet radio stations through the television.

Even the integrated web browser makes a decent fist of displaying web pages, including BBC Sport. The TV comes with its own self-levelling wall-bracket, but the tabletop stand costs an extra £179, which we think should be included at the price.

Is it enough to justify the price?
Once you've seen the Cinema 21:9 we wouldn't blame you if you were smitten with the proportions. They just look right.

However, there are several picture compromises prospective owners need to be aware of, so justifying the price tag is a virtually impossible task.

Philips should be applauded for its efforts, but it feels as though the Cinema 21:9 just hasn't been fully thought out.